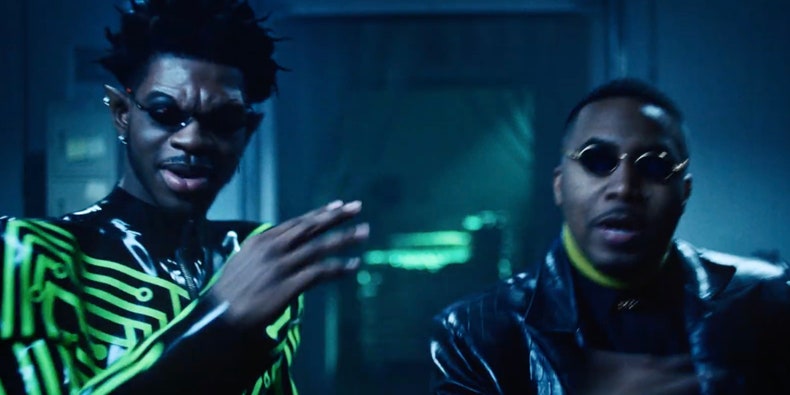 Full of references from the classic 1999 film, The Matrix, Lil Nas X dropped his new music video for his Nas-assisted single, ‘Rodeo’. The visuals were directed by Bradley & Pablo and are a must see.

While ‘Rodeo’, which originally debuted on Lil Nas X’s 7 EP, the new version featuring Nas is featured in the official music video. The ‘Old Town Road’ rapper is quickly proving that he won’t be a one-hit-wonder and is here to stay.

END_OF_DOCUMENT_TOKEN_TO_BE_REPLACED

Exciting day for rap and R&B fans, as legends in their own right, Nas and Mary J. Blige, have announced a huge 22-city co-headlining tour.

Kicking off on July 11th in West Palm Beach, the North American summer tour will make stops in Detroit, Atlanta, Houston, Las Vegas and more, until the tour comes to an end on September 10th in Toronto. Tickets go on sale for the general public on Friday, April 19th at 10AM (local time) via LiveNation.com, with a Citi presale for card holders beginning on Wednesday, April 17th at noon.

END_OF_DOCUMENT_TOKEN_TO_BE_REPLACED

Kicking off what will certainly be a great month of live music in Chicago, the month-long Red Bull Music Festival invaded Chicago last night with a stacked opening night lineup. Taking place at the Wintrust Arena, Red Bull hosted a GOOD Music Showcase that featured a number of the label’s members and closest affiliates, including Desiigner, Teyana Taylor, Nas, Pusha T and more. From top to bottom, fans in the Windy City enjoyed performances from some of their favorite rappers and singers.

The night kicked off in great fashion as GOOD Music’s 070 Shake, got the performances started by singing her new collaboration’s with the label’s founder and Chicago’s own, Kanye West, who unfortunately did not make an appearance despite fan speculation. The set was short but sweet and set the tone for the remainder of the night.

After one of the labels newest signees, Valee, performed, ‘Panda’ rapper Desiigner delivered the wildest and craziest set of the entire night. Desiigner had an infinite amount of energy and had the floor level moshing and going crazy. Desiigner even immersed himself into the mosh pit and put it all on the line to keep the crowd engaged. While he doesn’t have the star power of the night’s headliners, Desiigner proved why he is certainly worthy of his spot on GOOD Music.

Although she didn’t dive into the crowd like Desiigner, Teyana Taylor’s performance was also well received by the Chicago crowd, getting some of the loudest screams of the entire night. Teyana’s set was a nice contrast with all the rapper’s on the lineup, as she showed off her impressive dance skills and amazing vocals. Her set was soon followed by the label’s president, rap legend, Pusha T. Pusha T always gives his all on stage and fans in attendance can attest that Saturday night was certainly no exception to the rule. Pusha performed a number of tracks from his new Kanye West produced album, Daytona, one of the contenders for Rap’s Album of the Year.

Last but certainly not least, Nas blessed the stage to greet his Chicago fans. One of the greatest of all time, Nas is as good as ever and like Pusha T, he performed tracks from his new album produced by Kanye, of course mixed with some of his biggest hits from throughout the years. Nas blew us away with his new tracks while keeping us nostalgic with the classic and was a great ending to an already memorable night. Well done Red Bull… well done!

Check out our photos from last night’s performance below and get your tickets for the remaining dates of the Red Bull Music Festival here.

END_OF_DOCUMENT_TOKEN_TO_BE_REPLACED

Winter is coming, but live music is showing no signs of stopping in the Windy City. Before the holiday concerts start to come to town in December, November has a collection of great shows that you need to check out. From a number of concerts taking part in the Red Bull Music Festival to the Smashing Pumpkins, Chicago is hosting a ton of great shows next month.

Check out our list of the 7 can’t miss concerts in Chicago this November!

END_OF_DOCUMENT_TOKEN_TO_BE_REPLACED

Who cares if summer music festivals have come and gone this year, Chicago will host a number of amazing concerts in November as part of the Red Bull Music Festival.

Kicking things off with a stacked music showcase from Kanye West’s G.O.O.D Music label, which boasts performances from Nas, Pusha T, Teyana Taylor, Valee and more at the Wintrust Arena, the festival will also host concert from Vic Mensa, Cupcakke,Jamila Woods and more.

Tickets for the festival go on sale Tuesday, September 25th at 10:00 AM (CT) and fans can visit RedBullMusic.com/Chicago for more info.

Check out the Red Bull Music Festival Chicago lineup below.

END_OF_DOCUMENT_TOKEN_TO_BE_REPLACED

Two legends will be hitting the road later this year for an awesome co-headlining tour. Teaming up in September and October, hip-hop royalty Nas and Lauryn Hill will make a number of tour stops throughout North America.

Nas and Lauryn Hill’s joint tour will kick off in Chicago on September 7th at the Huntington Bank Pavilion at Northerly Island, the duo will then make stops in Toronto, Boston, Los Angles, Miami and more, until the tour concludes on October 11th in Vancouver. Fans can visit Nas and Lauryn Hill‘s official website for upcoming ticket information.

Peep the dates for Nas and Lauryn Hill’s 2017 tour below.

END_OF_DOCUMENT_TOKEN_TO_BE_REPLACED

If its initial lineups are any indication, this will be the best year for Riot Fest yet, as festival organizers have announced the first wave of Denver and Chicago artists. Hitting the stage at Riot Fest this year will not only be the reunion of the original Misfits, but Morrisey, Death Cab For Cutie, Rob Zombie, Jane’s Addiction, Sleater-Kinney, Fitz & The Tantrums, Jimmy Eat World, All Time Low, Death Grips and many more will be performing at this year’s Riot Fest. And don’t assume that it is all rock either, fans will also catch memorable performances from Nas, Tyler The Creator, Joey Bada$$ and Method Man & Redman this year.

Riot Fest will kick off this year in Chicago on September 16-18th at Douglas Park, and September 2-4th in Denver at the National Western Complex. You’ll definitely want to grab your festival passes fast for this one, so visit RiotFest.org or Ticketfly.com for more ticket info.

Check out the first wave of Chicago and Denver performers below.

END_OF_DOCUMENT_TOKEN_TO_BE_REPLACED

The best and brightest of this past week in music, as well as a throwback track! Hopefully you can bump these on the way to work to brighten up your Monday mornings! Make sure to check out our SoundCloud page where we post all the songs of the week. END_OF_DOCUMENT_TOKEN_TO_BE_REPLACED

Listen to Nas’ new track ‘The Season’, produced by the late great J Dilla. No word yet on what project this track will be on, but don’t be suprised if it ends up on next studio album.

END_OF_DOCUMENT_TOKEN_TO_BE_REPLACED

The best and brightest of this past week in music, as well as a throwback track! Hopefully you can bump these on the way to work to brighten up your Monday mornings! Make sure to check out our SoundCloud page where we post all the songs of the week. END_OF_DOCUMENT_TOKEN_TO_BE_REPLACED