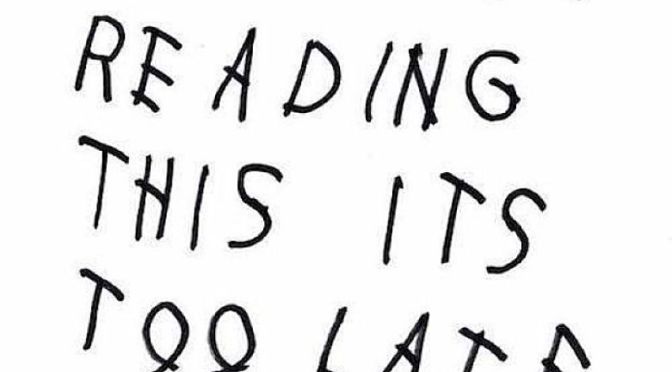 Drake almost broke the internet Thursday when he “pulled a Beyonce” and dropped a surprise album, titled If You’re Reading This It’s Too Late. The first question though, is this even an album? Is it a mixtape? Well, it really isn’t that black and white. When you think of a mixtape, you think of a lower quality project which is less cohesive and most importantly released for free. When you think of an album you think of completely original beats, more strategic album packaging and covers, and usually for sale on iTunes, as well as stores. If You’re Reading This It’s Too Late falls somewhere in the middle. While the beats are original (as opposed to Lil Wayne’s Sorry 4 The Wait projects), the album sounds more like a mixtape than an album. Also too, fans were led to believe that Drake’s “upcoming album” was Views From The 6 (which still is expected to release this year). The album art also appears to be more of a mixtape cover than an album cover. However, even though the project was also released for free streaming on Soundcloud, IYRTITL was released for sale on iTunes. So which is it? Again, it’s still not clear.

Usually artists make it clear whether a project is an album or a mixtape. Not this time though, and likely for good reason. Yesterday, we speculated that IYRTITL was released for sale on iTunes so Drake could finish his contractual obligations from his record deal with Cash Money Records. If Drake’s deal (as expected) was for four albums, then IYRTITL being released as a studio album likely may have legally made Drake a free-agent. Given the tension and the $51 million dollar lawsuit that involves Lil Wayne, Drake, Young Money, and Cash Money, it would not be a big surprise that Drake would want to pull such a move. Although Drake may want a judge to view the project as an album, as an artist Drake may want the project viewed as a mixtape. Like we said earlier, the album that Drake has been focusing on is his forthcoming Views From The 6 album. If this LP is merely a project of songs that didn’t make the final cut for Views From The 6, so that Drake could finish his Cash Money obligations, then artistically Drake may not consider this project a true studio album.

Of course, not knowing whether this project is an album or a mixtape makes judging the project’s quality a little difficult. Perhaps it shouldn’t matter, but if this project is merely left over tracks from a true album, then maybe judging it to the same standards of Thank Me Later, Take Care and Nothing Was The Same isn’t fair. But for sake of a review, I choose to view If You’re Reading This It’s Too Late as more of a mixtape to prepare fans for his Views From The 6 album, which I am now even more excited for after IYRTITL.

After a few listens, judging the 17-track project to the standards of a mixtape was the right move, as IYRTITL is certainly not to the quality of Drake’s three previous studio albums, and especially a downgrade from his 2013 Nothing Was The Same. This is not to say that IYRTITL isn’t a quality project. At the end of the day, it’s still Drake and his surprise mixtape is still better, and with more production value, than your favorite rapper’s mixtape (and maybe their albums too). Probably the project’s hottest song is its closing track ‘6PM in New York’, a trilogy of tracks in a sense, following his ‘9AM in Dallas’ and ‘5AM in Toronto’ songs from throughout the years. This is not only the track where Drake takes hilarious shots at his YMCMB labelmate Tyga (for Tyga’s comments on Drake in Vibe), essentially calling the rapper a pedophile, but the track stands out because its nearly five minutes of Drake rapping, no hooks, no verse, just rap and some of his most personal lyrics on the project.

Although If You’re Reading This It’s Too Late doesn’t start off as strong as it finishes, with lackluster and potentially forgettable tracks like ‘Energy’, and ’10 Bands’, the project really picks up with ‘Know Yourself’. The Boi-1da and Vinylz produced track is one of the hottest beats on the project and Drake contributes everything that make him one of the best rappers in the game: singing mixed with rapping, unique flows, and an overall catchy and unique hook. Picking up momentum, in ‘No Tellin” Drake potentially throws a little shade at his OVO Sound artist iLoveMakonnen, rapping “All you n*ggas two faced, got the Club Goin’ Up on a Tuesday.” Diss at the ‘Tuesday’ singer or not, Drake certainly goes hard throughout the track. The album’s next track ‘Madonna’, also produced by Boi-1da, starts off with a screwed background where Drake raps “you can be big as Madonna just get in the car and let’s touch the road.” The Madonna inspiration even landed the iconic singer a shout out and a handwritten thanks from Drizzy in the album credits, along with the Toronto Rappers and “Drake’s last new friend”, Riff Raff.

Some of the albums other great tracks fans heard a few months ago as Drake released the songs (like ‘6 God’ and ‘Used To’) on his Soundcloud. While ‘Used To’ has IYRTITL’s only feature from Drizzy’s mentor Lil Wayne, the project also has a few contributions from OVO Sound’s PartyNextDoor and G.O.O.D. Music’s rapper/producer Travis $cott. ‘Company’ featuring Travis $cott is definitely a keeper. The production and heavy bass from Travis and Wondagurl is absolutely killer, and while Travis’ verse doesn’t completely outshine Drake’s, La Flame gives the track his A-game. The autotuned ‘Preach’ with PartyNextDoor is also a great track, which shows exactly why Drake signed PND to his OVO label.

Despite its relatively slow start, the project really picks up in quality throughout the LP. Of course some tracks are better than others, but not one stands out as bad (which is impressive for a 17-track project, that is arguably a mixtape). The production is consistent in its quality, which makes sense when you have a team of producers like 40, Boi-1da, Vinylz, and PND. Also, most likely a coincidence, but every song with a “6” in its title is a great track. Of course ‘6PM in New York’ and ‘6 God’ are standouts but ‘Star67’, ‘You & The 6’ and ‘6 Man’ are especially great. So if six is Drake’s lucky number, then Views From The 6 will maybe be Drake’s best album yet.

If you take If You’re Reading This It’s Too Late for what it probably is, a mixtape (disguised as an album) to give fans a treat before the much anticipated Views From The 6, then it is hard to not enjoy it. Even the stand-out tracks don’t stand-out that much (there is certainly no ‘0 to 100’ on IYRTITL), but every song on the project is at the very least decent (and many are still great). The project is produced by some of rap’s top names and you can tell in the result, and Drake’s B or C-Game is still better than a lot of rapper’s A-game. Is it better than Nothing Was The Same? No. Is it worth a listen? Easily, and Drake is well beyond the point that anyone should go into a new Drake project wondering if Drizzy will deliver or not. Mixtape, album, or something in-between, If You’re Reading This It’s Too Late delivers and is one of the best rap releases of the year, and although it’s only February, I expect things to stay that way by the year’s end.

5 thoughts on “Album Review: If You’re Reading This It’s Too Late | Drake”