Hip-Hop is a young man’s game, but as the pioneers of Gangsta Rap have became film stars and headphone moguls, the subgenre faded off into the distance, making way for the shiny suit era (post-Biggie Bad Boy), middle class rap (Kanye West, Childish Gambino), and emotional rap (Drake, Lil B).

Now, the genre is back in full force, and it’s hard to decipher what made this happen. Rappers like Drake are starting to show more aggressiveness in their vocals (and maybe even throw a gun lyric in here or there). One of the few to actually call themselves a Gangsta rapper, ScHoolBoy Q, sold an impressive 150,000 copies of his album Oxymoron in a week. It seems like there is starting to be a good balance of poppy, tough and preppy rap, but when you compare the Gangsta music of 2014 to that of the past, there’s a huge difference: Gangsta music in 2014 is one sided. 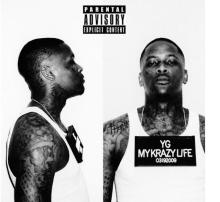 YG’s debut album, My Krazy Life (‘MKL‘), was an unexpected critical success, most likely more than anything else because of YG’s regret for for his actions, summed up in the outro ‘Sorry Mama’. The reason why he may have felt the need to express his remorse may be what separates him from most of 2014’s other Gangsta rappers- he actually did what he raps about. In 2009, YG did a six month stint jail for a home invasion, which made him reevaluate his future and motivated him to become successful.  MKL was a literal description of everything leading up to the incident and the following consequences. Constant collaborator and friend Ty Dolla $ign’s brother is serving a life sentence. ScHoolBoy Q and Vince Staples also tend to rap about the downside of gang life and drug dealing as most of their friends are dead.