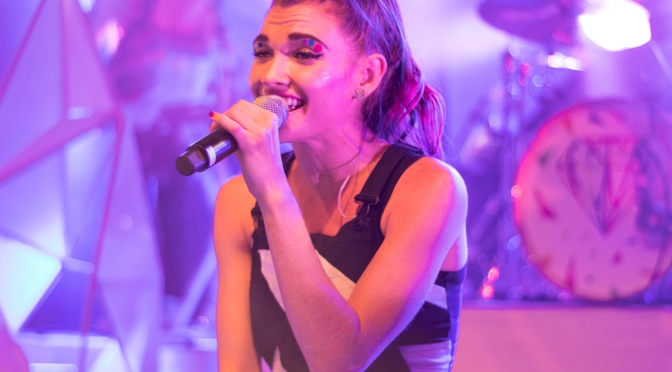 Performing at The Rave, one of the Midwest’s most infamous venues, MisterWives were joined by Los Angeles’ Smallpools, who are fresh off the release of their new EP, and Milwaukee’s own Vinyl Theatre. With a hometown performance billed for the night and a great opening set from Smallpools to warm up the crowd, tonight’s lineup gave fans plenty of reason to get to The Rave when doors opened.

But as the openers stepped off stage and the rain continued to pour down outside the venue, it was soon time for the MisterWives to greet their Milwaukee fans. While the New York natives delivered the same energy and color that fans witnessed at Summerfest, it was the set design and club vibes that made tonight a completely different performance.

Although great, MisterWives’ festival performance was just that… a festival performance. Their loyal fans showed up in numbers to secure their spot in the front, but the crowd was still full of casual fans who came to see the hits or perhaps just to catch some live music with no other introduction to the ‘Reflections’ group.

Tonight was different, as the Mandy Lee-led group and its fans benefited from an intimate performance where the majority of those in attendance knew the tracks word-for-word, from their 2014 debut EP to their albums Our Own House and Connect The Dots. And the performance’s set design and production also added to tonight’s experience, as shapes and colors gave life to the cover art of MisterWives’ newest album.

Highlights of the night include MisterWives’ opening performance of ‘Machine’, ‘Reflections’ and of course their amazing encore performance of their 2015 LP’s self-titled track, ‘Our Own House’. With two great Milwaukee performances under their belt in the past year alone, you can likely bet that MisterWives will return to Wisconsin in 2018 or when their next tour comes around.

Check out our photos from MisterWive’s Milwaukee performance below, and get your tickets for the remaining dates of their Connect The Dots Tour here.