Coachella took an extended hiatus due to the pandemic but is set to return in 2022 with an epic lineup.

Presale for this year’s Coachella begins on Friday, January 14th at 10 AM (PT) with remaining inventory going on sale at 2 PM. Get yours fast because with a lineup this great, they will surely sell out.

Peep the full Coachella 2022 lineup below.

END_OF_DOCUMENT_TOKEN_TO_BE_REPLACED

As shown by the energetic sold-out crowd, Chicago music fans couldn’t wait for the return of iHeartRadio and 103.5 KISS FM‘s annual Jingle Ball. Returning to Rosemont’s Allstate Arena, but with new COVID-19 protocol, the Jingle Ball brought an all-star cast of performers across several genres to make up for an unfortunate year off.

One immediate highlight from Tuesday night’s performances was the cast of musicians that blessed the Allstate Arena and Chicago’s Jingle Ball for the first time. Not only did the lineup’s two biggest performers (Doja Cat, Lil Nas X) perform at Chicago’s Jingle Ball for their first time, but the undercard also welcomed new additions like Dixie D’Amelio and Tate McRae. Of course fans were excited for Bazzi and AJR’s return, but the new blood was definitely a reason fans sold out this year’s show well in advance.

From the moment doors opened until the night’s headlining sets, energy was high throughout the packed arena. The night’s opening performers like Dixie D’Amelio, Tate McRae and Bazzi rewarded fans for arriving on time with short-but-sweet performances. Dixie D’Amelio understood the assignment by staying on theme with a performance of her Liam Payne assisted holiday single, “Naughty List”. D’Amelio, who turned her Tik-Tok empire into a music career, also performed her biggest song to date, “Be Happy” before saying goodbye to her Chicago fans.

Bazzi, who is no stranger to the Jingle Ball Tour, also got the mood going with his biggest singles to date, including “Paradise”, “Beautiful” and “Mine”, which fans sang along to from start to finish.

Perhaps the best performance of the night’s undercard was Tate McRae who showed off her impressive vocals and equally talented dancing skills throughout her 5-track set. Tuesday night marked McRae’s return to the Windy City after blowing fans away at Lollapalooza this past summer.

Throughout the second act of the Jingle Ball’s return, fans were treated to energetic group performances from AJR and Saweetie. Although Saweetie had fans twerking and dancing throughout the venue with songs like “Best Friend” and “Tap In”, it was AJR that burned the house down. The indie pop trio of Adam, Jack and Ryan Met are no strangers to the Jingle Ball, and they go so hard in an abbreviated performance, that you wonder how they can sustain an entire headlining set on their own tour (which will kick off next year with a Chicago date on the schedule).

Next up, Doja Cat did her best to fit in as many as her hits from the past three years as physically possible. With major records like “Say So”, “Juicy”, “Like That”, “Get Into It”, “Kiss Me More” and “You Right”, there was no shortage of hits for her Chicago fans. Doja has yet to announced a 2022 tour, but when she does be sure to get your tickets fast because she puts on a must-see performance, even when sharing the stage with so many other artists.

Although Doja Cat is a hard act to follow, the Black Eyed Peas brought the party to Chi-town with their enormous catalog of hits. From “Boom Boom Pow” to “I Got A Feeling”, the will.i.am led group only brought bangers to their co-headlining set.

Years of hits from the Black Eyed Peas could only be matched by one other artist on the lineup, that being Lil Nax X. The “Old Town Road” overnight star quickly proved he wasn’t a one-hit-wonder with hits like “Industry Baby”, “Holiday” and “MONTERO (Call Me By Your Name)”, all of which were performed for the sold-out crowd on Tuesday night. Lil Nas X alone was worth the price of admission and combined with Doja Cat and the Black Eyed Pease, the three were perfect acts to close out an especially memorable night of live music. 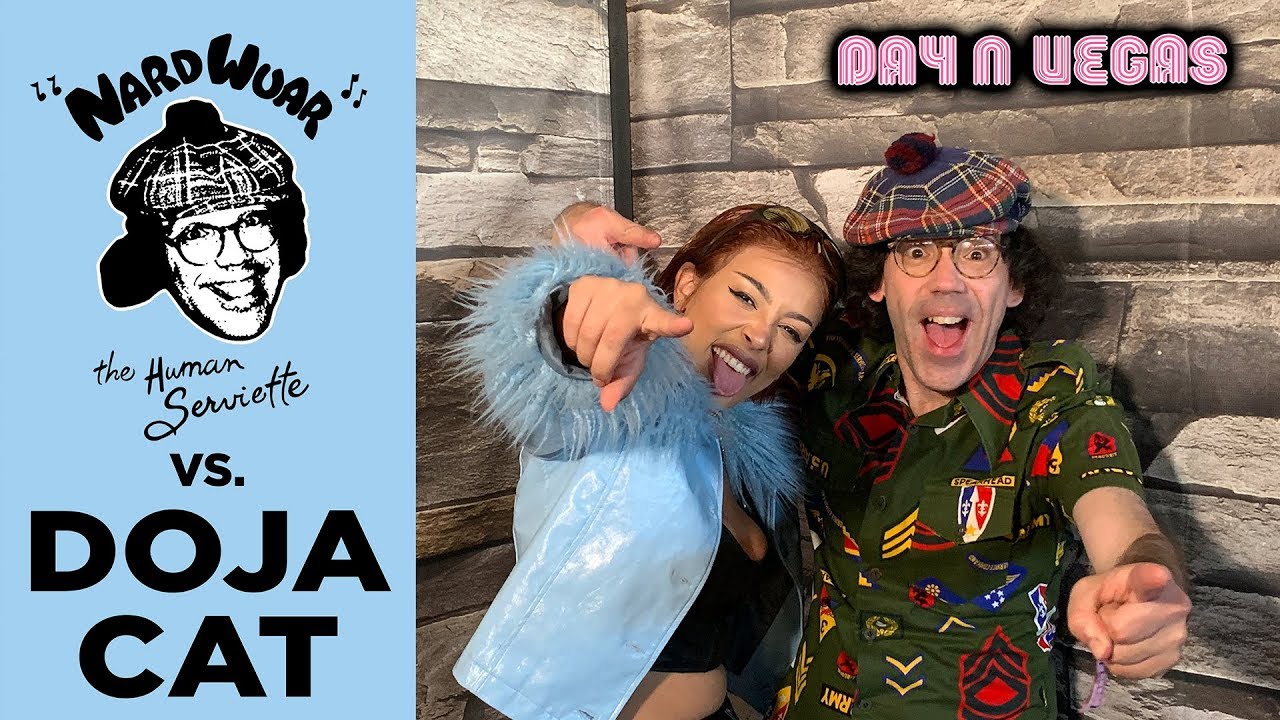 Narwuar the Human Serviette, the best interviewer in the entire game, headed down south from Vancouver to enjoy a weekend at the hottest new music festival, Day N Vegas.

The always entertaining plaid dressed journalist took time to interview one of the best emerging artists, Doja Cat, in the Sin City. As always Nardwuar blew the artist away with his deep research skills and awesome gifts.