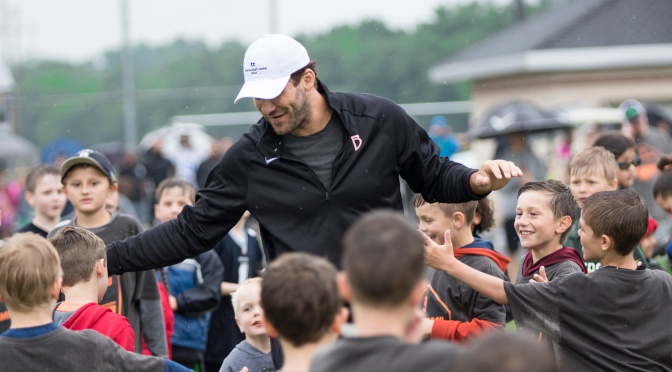 A year ago, Tony Romo shocked football fans across the nation with his retirement from the NFL. While many expected Romo to leave the Dallas Cowboys to sign with a team in need of a veteran quarterback, Romo took a new path by stepping into the broadcast booth with CBS. Fast-forward to 2018, Tony Romo is easily one of the most entertaining analysts in professional sports, across all networks.

Although a lot has changed for Romo in the past couple years, one thing that has stayed constant is his annual youth football camp at his alma mater, Burlington High School. Reuniting with Coach Steve Tenhagen, the two helped coach some of Wisconsin’s next football stars on Thursday afternoon.

Check out our photos of Tony Romo’s youth football camp below.

END_OF_DOCUMENT_TOKEN_TO_BE_REPLACED

A lot has changed since Tony Romo’s last visit to his hometown of Burlington, WI, for his annual youth football camp. After suffering a back injury during a preseason game against the Seattle Seahawks, rookie quarterback Dak Prescott stepped up to the plate for the Dallas Cowboys, leading the team to the best record in the NFC. Romo only saw action for one drive, in the team’s last regular season match up, which to no surprise, ended with a touchdown.

Many speculated what was next for Romo. Would he move a few hours south and lead the Houston Texans to their first Super Bowl? Would the Denver Broncos repeat their success with Peyton Manning, by inviting another veteran QB to lead their team? Or would Romo remain with America’s Team, either as a starting quarterback or to back up Prescott? To the surprise of many, Tony Romo instead announced his retirement and accepted a highly coveted broadcasting job with CBS. Football would remain part of Romo’s daily routine, but with a very different role.

While so much is changing for Romo, today was all about familiarity for the Wisconsin-native. Returning to his alma mater, Burlington High School, to join Coach Steve Tenhagen for their annual youth football camp, Tony Romo took a break from his training with CBS to give back to his hometown.

Check out our photos of Tony Romo’s youth football camp below and read what Tony had to say at his first press conference since announcing his retirement here.

END_OF_DOCUMENT_TOKEN_TO_BE_REPLACED

Growing up in Wisconsin, Tony Romo has always drawn comparisons to Green Bay Packers’ legend, Brett Favre, and that isn’t going to change anytime soon. During his hometown visit to Burlington, WI, for his annual youth football camp, fans couldn’t help but wonder if Romo will change his mind on retirement, just like Brett Favre in 2008.

Romo doubled down on his commitment to his new gig with CBS, stating, “I’m comfortable with where I’m at, and I feel good about the decision. You never really know ultimately how you’re going to feel until you decide to stop playing and that decision was obviously a very difficult time.” Romo continued, “I’m excited about the next opportunity. For me, a lot will be learned through experience. I learned that a long time ago with football.”

However, for those who are still crossing their fingers that Romo answers the phone and comes out of retirement, if any team (including the Cowboys) is in need of a quarterback to make a legendary run in the playoffs, there is good news.

When we asked Tony if he is staying in shape, when compared to previous years where he was preparing for the football season, Tony half-jokingly told us that he is in “the best shape of (his) life.” Romo explained, “I’ve had the same routine. That hasn’t change too much.”

“I haven’t exactly been squatting 400 pounds the past 3 or 4 years, once I had the back surgery I had to adjust everything (but) my routine and workout really hasn’t changed since football season.”

Although Tony didn’t state that continuing his workout routine was to keep his options open in case he decides to return to football, it’s good to know that the Cowboys’ all-time leader in passing yards is physically ready to go if he decides to make one last run.

One reason, of many, that Tony cited for his decision to join CBS was his family. Currently awaiting the birth of his third child, all of which are boys, we asked Romo if there was ever a name he wanted for one of his boys that ultimately received a veto from his wife.

“Yeah, Tony was one of them,” Romo told us. “But that (name) kind of got the boot pretty good. It got dismissed,” Romo joked.

Tony Romo also paid homage to Burlington legend, Don Dalton, who recently passed away at the age of 75. Romo told reporters about how the former Burlington Football coach was the reason he began playing football in high school.

Romo, having missed the deadline to enroll his high school’s football program, was approached by Dalton, who encouraged Romo to join the team. Although Romo thought it was too late to join, it was Don Dalton who made it happen.

“I think he saw something in me obviously. He knew that I had a chance to be a decent player,” Romo told reporters. Who would have guessed that years later Romo would be the starting quarterback for the Dallas Cowboys.

And just as Dalton made a mark on a young Tony Romo, Romo continued to pay it forward today, giving advice to some of the area’s youth athletes for his annual football camp.

Never forgetting where he came from, Dallas Cowboys quarterback Tony Romo returned to hometown of Burlington, WI for his annual youth football camp today. In a closed press conference, Romo took questions from the media and addressed the importance of giving back to his hometown, stressing that it’s not just about teaching the game but sometimes “it’s just about giving high-fives” and encouraging our athletes of tomorrow. And Romo did just that. Working alongside coaches from Burlington High School’s football program, Romo and Coach Steve Tenhagen taught the kids fundamentals, while pushing them to try their best, and most importantly, to have fun.

Tony wasn’t the Romo to steal to show today however. It was the adorable Rivers Romo (2), accompanied by his big brother Hawkins (4) who were the center of attention for many. A big basketball fan himself, Romo pulled “a Stephen Curry” by inviting his children to share the stage during his press conference, addressing questions about his camp, recovery, and upcoming seasons while the boys tried their best to sit patiently. Throughout the day, when he wasn’t mentoring future stars of South Eastern Wisconsin, America’s quarterback played with Rivers and Hawkins, gave Rivers a seat on his lap in the golf cart while the rain started to fall down, and overall showed us why he is as great of a dad as he is a Pro Bowl quarterback.

Check out our photos of Tony Romo’s youth football camp and press conference below.