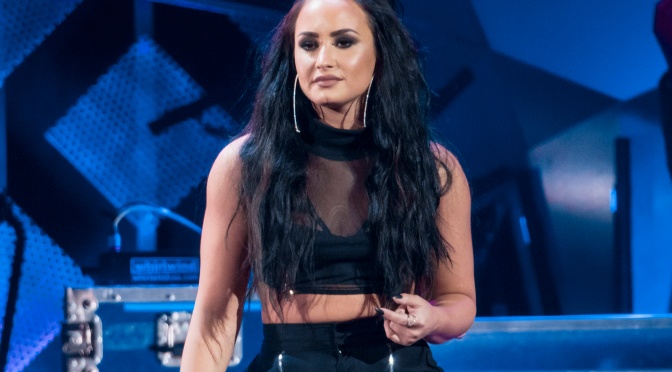 Just a month ago Demi Lovato was forced to postpone her October performance at the Rosemont Theatre a few short hours before showtime after the singer woke up with no voice. “I’m so sorry but it breaks my heart to tell you I have to reschedule the show,” wrote Lovato wrote to fans on Instagram. And while the sudden update was heartbreaking to her loyal Chicago fans, Lovato made up for the postponement and then some on Thursday night.

Now treated to the closing night on her headlining “Holy Fvck Tour”, fans at the Rosemont Theatre enjoyed performances from Lovato’s brand new rock album, which debuted a totally new sound from the former Disney star, as well as spins on some of her classic pop songs from throughout her career.

After delivering a few standouts from her new album, “Holy Fvck”, Lovato quickly took time to thank her fans and address the delay:

“First off, I just want to say, thank you so much for coming tonight,” Lovato told fans. “It’s no secret that I was supposed to play here back in October, and I got really really sick, I had no voice and I had to postpone the show, but you guys are here tonight and I promise I’m going to make it up to you guys.”

Although she owed no one an apology for losing her voice for performing with such energy from night to night, Lovato closer her apology by foreshadowing the rest of the evening, “Its the last night of the tour and I’m ending it here with you guys. Are ya’ll ready to have a f*cking good time tonight?”

Lovato delivered on that promise, getting the momentum for the rest of the night started with a familiar tune, a more rock-infused rendition of Demi’s massive hit “Confident”. Although Lovato’s new style and sound is very far removed from her 2015 album and especially her earliest projects, it’s great to see some of her hits still make their way into the setlist.

Next up Demi performed a couple fan favorites from the late 2000s, an unexpected Ashlee Simpson cover and her unapologetic anthem, “Sorry Not Sorry”. The remainder of her career spanning set was full of new tracks and spins on the old, a model which she perfected until the concert’s final moments.

Ending the evening on a high note, Demi finished with her new biggest track, her album’s lead single “Skin Of My Teeth” and perhaps her biggest pop single to date, “Cool For The Summer”, putting a big cherry on top of what was already a night that her Chicago fans will not forget.

Despite the original postponement, Demi more than made up for the new date with her Thursday night performance and now her Chicago fans will have less time to wait before she returns to the Windy City.

SKIN OF MY TEETH

Cool for the Summer