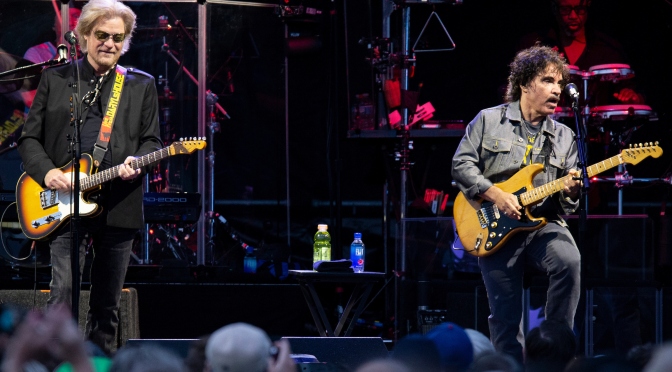 Dreams came true in Madison, WI on Sunday night as the Breese Steven Field closed out their summer concert lineup with none other than the legendary John Hall and Daryl Oates. Despite some unexpected rain, the evening was everything fans wanted and more with Hall & Oates delivering memorable performances from their extensive catalog of hits.

Opening their headlining set with two beloved records, ‘Maneater’ and ‘Out of Touch’, both classics from the ’80s that still get their share of plays in 2019, Hall & Oates continued throughout their 4-decade discography until closing their set on a high note with ‘I Can’t Go For That’. Even in their 70s, Hall & Oates didn’t miss a beat and sound as good as ever.

With fans still wanting more, Hall & Oates returned for one of the best encore performances you’ll ever see, as the pop rock duo said goodbye with performances of ‘Rich Girl’, ‘Kiss on My List’, ‘Private Eyes’ and ‘You Make My Dreams’. When one group’s encore has bigger hits than most artists’ entire body of work, it says a lot about the quality of their music. There was no better place to be than Madison last night.

Check out our photos from Daryl Hall & John Oates’ Madison performance below.