Milwaukee was treated to a very rare and special performance on Wednesday night as Wilco frontman, Jeff Tweedy, kicked off his North American solo tour at the city’s beautiful Pabst Theater.

Delivering a very intimate acoustic performance, in support of his debut solo album Together At Last, Tweedy reflected on his massive career with stripped down renditions of tracks from Wilco, Uncle Tupelo (his alt-country group from ’87-’94) and side projects from throughout the years.

As fans began to find their seats, the evening began with an opening performance from guitarist and Jeff Tweedy-collaborator, Jame Elkington. In addition to his work with Chicago’s “Eleventh Dream Day”, Elkington (like Tweedy) also released his first solo album in 2017 with Wintres Woma. And while the majority in attendance weren’t completely familiar with the English-born artist’s music, his sound perfectly complemented Tweedy’s and set the mood for the rest of the night. 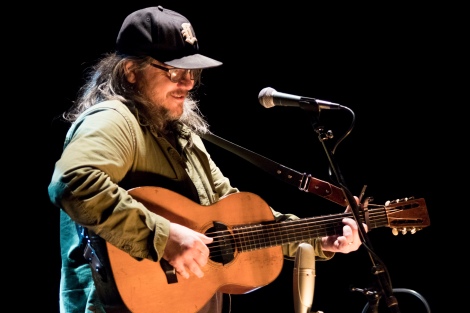 With the mood set and anticipation levels high, Jeff Tweedy stepped on stage to greet his Wisconsin fans. The singer/songwriter’s local fans weren’t the only ones to fill the seats either, as the Belleville, IL native had fans who made the 90-mile drive from the Windy City, evidenced by the crowd’s reaction to Tweedy’s performance of Wilco’s 1999 track, ‘Via Chicago’ to help kick off the set.

Through Tweedy’s roughly 20-track set, the Grammy-award winning musician put on intimate performances from his three-decade-long catalog. Dating back as far as his time with Uncle Tupelo with tracks like ‘New Madrid’ and ‘Acuff-Rose’ and spanning as recent as 2017 with his new song ‘Bombs Away’, the show had a little bit of everything while also focusing on Wilco’s best records, the band that made Tweedy a household name in alt-rock.

Whether your favorite song of the night was Tweedy’s solo version of Wilco’s hit single ‘Jesus, Etc.’ or one of the many songs Tweedy recorded for Together At Last, the night was full of highlights to choose from.

Tonight was just further evidence that Jeff Tweedy is a jack of all trades and a man of many talents. He’s best known for being the frontman of Wilco but he’s kept his career fresh with side projects like Loose Fur, Golden Smog, Tweedy (with his son, Spencer) and even with his fictional band “Land Ho!” during his cameo on NBC’s Parks and Recreation.

While some artists find what works and stick to it from album to album and tour to tour until the venues get smaller and fans stop showing up, Tweedy keeps his fans coming back by switching things up in every way possible, but with basic staples like a guitar and great live music staying consistent.

If you’re a fan of Jeff Tweedy, Wilco or simply a fan of good music, do yourself a favor and catch Tweedy on his new fall tour.

Check out our photos from Tweedy’s North American tour opener below.