Bonnaroo has one of the best lineups of the summer thus far, with scheduled performances from Eminem, Muse, The Killers, Bon Iver, Future, Bassnectar, Anderson .Paak, Khalid and many more, and to increase your anticipation, the Tennessee festival has revealed its full daily lineup.

Getting the party started on Thursday, June 7th fans at The Farm will be treated to sets from Jessie Reyez, Lissie, Manic Focus, Durand Jones & The Indications, Ron Gallo and more.

Next up, fans in Manchester on Saturday will catch artists like Eminem, Bon Iver, Kaskade, Anderson .Paak and The Free Nationals, Sylvan Esso, STS9, Brockhampton, The Glitch Mob and more.

Then last but not least, on Sunday, June 10th, The Killers, Future, Alt-J, Dua Lipa, Alison Wonderland, Moon Taxi and more will perform.

Check out Bonnaroo’s full daily lineup below and get your tickets now at Bonnaroo.com. 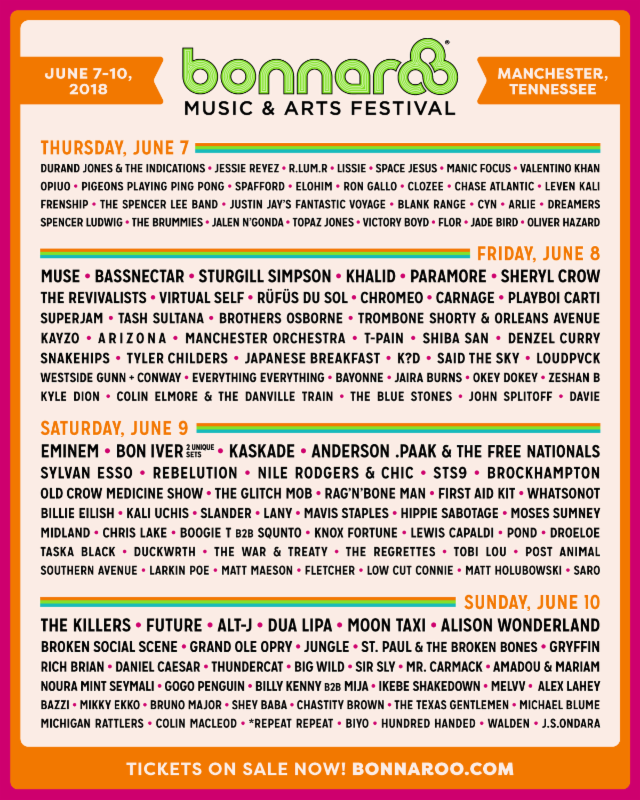