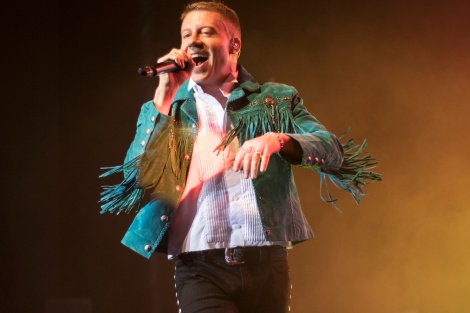 Macklemore returned to The Rave’s Eagles Ballroom in Milwaukee tonight for another sold-out performance, after a memorable 2016 performance with Ryan Lewis, in the very same room. And while Macklemore was without his partner-in-crime this time around, as the duo of “Macklemore and Ryan Lewis” are currently on hiatus while the close friends take some time musically apart, Macklemore still brought the same fun energy in support of his new solo LP, Gemini.

Up first for the evening were opening sets from XP, Eric Nally and Travis Thompson, emerging artists that you can all find featured on Gemini. Not only did the cast of openers gain new fans with their opening performances, but all of the above would later join Macklemore on stage to perform their Gemini collaborations, ‘Church’, ‘Corner Store’ and ‘Ain’t Gonna Die Tonight’. Gemini also boasts features from artists like Kesha, Offset, Skylar Grey and Lil Yachty, but having some of the album’s featured artists, big or small, definitely was a nice bonus to the night.

But despite entertaining performances from XP, Nally and Thompson, the anticipation continued to build as it was time for the man of the hour to hit the stage. And to kick off his performance in support of his new album, Macklemore opened his set with Gemini‘s opening track, the Eric Nally-assisted ‘Ain’t Gonna Die Tonight’. Macklemore continued with two more tracks from the 2017 LP, his first solo album since 2005, before really getting the crowd going with his 2012 mega-hit, ‘Thrift Shop’.

The above sequence set the tone for the entire night as Macklemore performed the vast majority of his new album, while still taking time to pay homage to his catalog of hits with Ryan Lewis with performances of ‘White Walls’, ‘Thrift Shop’, ‘Downtown’ and ‘Same Love’. Then, to end the glorious night and close out his 17-song setlist, Macklemore gave fans a great encore performance of his Gemini single, ‘Glorious’. Fans already can’t wait for Macklemore’s next Milwaukee visit, no matter who he brings with him.

Check out our photos from tonight’s performance below and peep the remaining tour dates here.