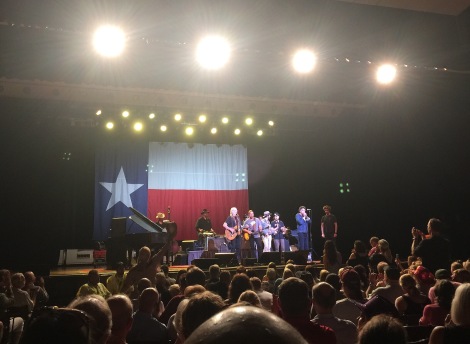 Willie Nelson was on the road again last night, as the legendary country singer brought his band and family to the Ravinia Festival in Highland Park, IL, just 20 miles north of Chicago. Supported by his son, Lukas Nelson as his band, Promise of the Real, the 84-year-old Nelson delivered a memorable performance to the packed crowd, bringing a bit of Texas to the Windy City.

Up first for the night was Lukas Nelson & the Promise of the Real, who just finished a big performance at the Bonnaroo Music and Arts Festival. With Lukas, growing up with Willie Nelson as his dad, and Promise of the Real who have toured with Lukas for years, as well as the amazing Neil Young, the opening performers were more than prepared to get the night started on a high note.

Jamming out to tracks like ‘Four Leter Word’, Find Yourself’, ‘Carolina’, Nelson’s hometown dedicated ‘Just Outside of Austin’ and more, Lukas Nelson gave the Ravinia crowd a half hour of great tunes. Highlights of Lukas Nelson’s set included his many guitar solos, as well as his performance of ‘(Forget About) Georgia’, Nelson’s ode to an ex-girlfriend. Lukas ended his set with a huge minute-long guitar solo to ‘Set Me Down on a Cloud’, with his hair flying every which direction and the crowd giving Willie’s kin a big standing ovation.

As crew finished preparing for the man of the night, the lights turned up in the pavilion and Willie came out to a great the crowd of thousands, who rose to their feet as Willie began his performance. Backed by his loyal band, as well as members of his family, including his (2-year older) “little sister Bonnie” and son Lukas who returned to the stage, Willie was in great company from start to finish. Nelson was also joined by one of his most loyal companions, his beat up Martin N-20 nylon-string acoustic guitar, “Trigger”. And while the guitar looks older than Willie himself, who proves that 84 is the new 50, it still can put on a great show.

Nelson kicked things off with his 1973 track, ‘Whisky River’, a fan favorite and Grammy-nominated classic perfectly tailored to begin a memorable performance. Following with his 1993 ‘Still Is Still Moving To Me’ and his 2002 Toby Keith collab ‘Beer For My Horses’, Nelson performed a number of hits from his entire catalog of tracks that cover over a half a decade.

One of the first big highlight’s of Nelson’s set included his and Lukas’ cover of ‘Texas Flood’, where Lukas took over the vocals and father and son closed out the song by trading guitar solos. Instantly Willie continued the momentum with the classic, ‘Mama Don’t Let Your Babies Grow Up To Be Cowboys’, but as Willie was rocking his cowboy hat in front of a huge flag from the Lone Star State, he encourages us to do as he says, and not as he does.

No Willie Nelson set would be complete without a couple entertaining dedications to Mary Jane, and tonight fans were treated to tracks like ‘It’s All Going To Pot’ and ‘Roll Me Up’, where Nelson lays out his desires to be smoked in a joint when he passes away.  And although Nelson is in his 80’s, touring the country keeps him young and he reminded the Ravinia crowd he’s still alive and kicking and won’t be “rolled up” anytime soon, with his track ‘Still Not Dead’, his 2017 response to the various death rumors that have surrounded his name.

From his Hank Williams cover, ‘Jambalaya on the Bayou’, his performance of ‘Georgia On My Mind’, to his encore of ‘Uncloudy Day’, Willie Nelson and company gave Highland Park a night that they will not soon forget.