While Illinois was coming off an exciting victory over Michigan State, it was all Wisconsin in this one, as the Badgers demolished the Fighting Illini, 48-3. From offense to defense, Wisconsin was operating on all cylinders for their Homecoming crowd.

Matching a career high with three touchdowns, Corey Clement again ran for over 100 yards (123), and was just one of many Wisconsin rushers who contributed to the teams combined 363 yards rushing. Although the receivers played a secondary role in the offense today, Jazz Peavy scored on a first quarter touchdown and continued to show why he is one of the better receivers in the conference.

And despite putting up 31 points in the first half, with three touchdowns coming in the first quarter alone, it was the defense that truly set the tempo early on. Four interceptions from three different players, Wisconsin’s defense consistently gave the offense exceptional field position.

It was truly a team victory, and while the Badgers absolutely dominated and did everything right, their weaknesses were still under watch as both quarterbacks, Alex Hornibrook and Bart Houston, took snaps today.

While Hornibrook and Houston each threw for one touchdown, and doing what was asked of them, the inconsistency at the quarterback position, that maintain this far into the season, may be what costs Wisconsin during a potential conference championship, bowl game, or even a shot a the national title. 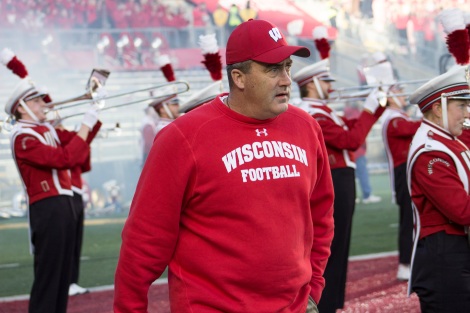 And don’t rule Wisconsin out of a playoff appearance just yet. While many fans lost hope that a two loss team could even make the playoffs, with Wisconsin’s resume and if they continue to dominate like they did against Illinois, they could certainly have a chance if they win out.

Wisconsin has the best chance of any Big 10 team to make it to the conference championship next month, and although Michigan and Ohio State both beat the Badgers and are currently ranked higher, a Big 10 Championship may lead to a playoff birth, even with two losses.

And when Wisconsin very likely may face Penn State in the conference championship (which may help or hurt them), don’t underestimate Wisconsin’s chances of winning their next three.

If, which is still a big “if”, Wisconsin does make it to the playoffs, they will have to figure out this quarterback situation. Neither Hornibrook or Houston will turn into an elite quarterback by the end of the season, but one of them will need to step up, even with Wisconsin’s elite defense. To what extent and who will be the one to do it? Only time will tell.

The Badgers will look to keep their playoff hopes and chances at winning the Big 10 alive, next week at Purdue, for a 11:00 AM Saturday game in West Lafayette.