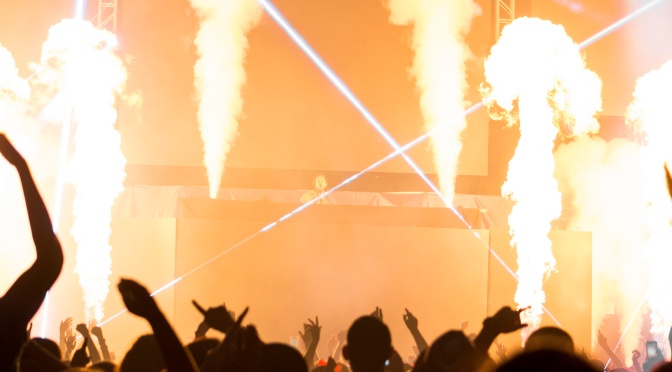 Hours ago, pop superstar Ariana Grande stepped off stage at Chicago’s Allstate Arena for another great year of the B96 Pepsi Summer Bash. With some awesome performances from the biggest names in music, the packed crowd in Rosement, IL also saw sets from Meghan Trainor, EDM superstar Calvin Harris, Mike Posner, Charlie Puth, Daya and Bebe Rexha. Whether it was it was one of earlier sets from an emerging name in pop, or one of the night’s headlining sets, everyone from top to bottom delivered for the Windy City.

Kicking things off for the night in her Chicago Cubs jersey was 17-year-old singer, Daya. Although she is new to the game, she already has three big singles in constant rotation. Whether it’s her debut single ‘Hide Away’, her empowering anthem ‘Sit Still, Look Pretty’, or her Chainsmokers collaboration, ‘Don’t Let Me Down’, Daya is killing it, even before her high school graduation. Following Daya’s opening performance was the talented Bebe Rexha. Although she is still making a name for herself as a performer, you know more about the New York native than you think. She has written for a number of big artists in the past, including Eminem and Rihanna’s hit single ‘Monster’, but now if you ask her, the G-Eazy collaborator would tell you she’s focused on “me, myself and I.” Rexha isn’t far removed from her last performance at the Allstate, where she opened for singer Ellie Goulding, and as always she put on a memorable performance.

Next up was Mike Posner, who has been getting spins on B96 years ago, ever since his breakout single, ‘Cooler Than Me’. Now, many years removed from his debut album and college days, the Duke graduate is currently promoting his new album, At Night, Alone. Opening with a couple records off his new sophomore LP, Mike Posner brought some folk-influenced pop to the Chicago crowd. Although Mike kept it intimate with his album version of his newest hit single, ‘I Took a Pill in Ibiza’, he still found time to get the crowd hype when he took it back for ‘Cooler Than Me’. Fans left wanting more will be able to catch Posner back in the Windy City this August, as he supports Nick Jonas and Demi Lovato on their forthcoming tour.

Following Mike and his guitar was Charlie and his piano, Charlie of course, being singer/songwriter Charlie Puth. Opening with his Meghan Trainor collaboration, ‘Marvin Gaye’, Charlie killed it on the keys. And while his skills on the piano are more than impressive, the night was not about boasting, as Puth had the crowd light up the arena as he dedicated his performance of his #1 record, ‘See You Again’, to all the lives lost in Orlando. Moments later, after Puth said his goodbyes to the Chicago crowd, it was time to rage as Calvin Harris performed his only radio show of 2016. Getting the crowd moving to hit after hit, the highlight of Harris’ performance came as his new Rihanna collaboration, ‘This Is What You Came For’, was blasted throughout the Allstate.

After Calvin Harris and Charlie Puth’s performances, the other half of Puth’s ‘Marvin Gaye’ collaboration, that being Meghan Trainor, stepped on stage. Trainor opened with her most recent single, ‘Me Too’ and closed with her big 2016 record, ‘No’, but the crowd began to erupt as Meghan teased fans by performing a “brand new song that (she) wrote for Chicago”, which was really her smash hit, ‘All About That Bass’.

Soon after Trainor stepped off stage, it was time for the birthday girl, singer Ariana Grande, to bless fans with her headlining performance. Grande, who turned 23 today, gave an extra special performance for Chicago tonight, and it is hard to imagine a better way for her to celebrate her big day. The entire crowd sang Happy Birthday for the ‘Dangerous Woman’ singer as she emerged, and in return she sang a collection of her biggest hits to date, giving the B96 Pepsi Summer Bash an ending to remember.

Check out our photos from the B96 Pepsi Summer Bash below. 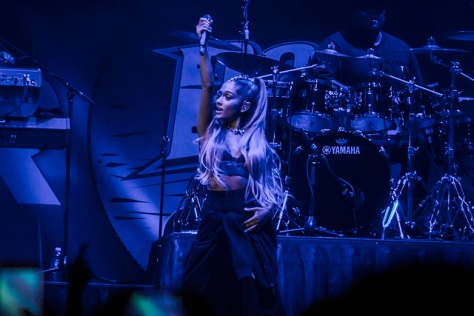 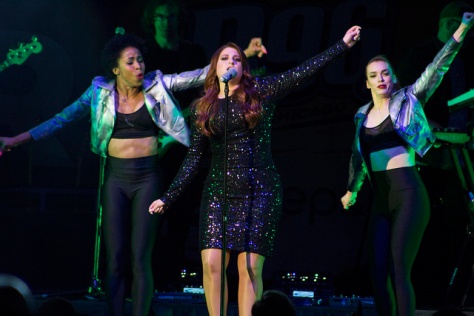 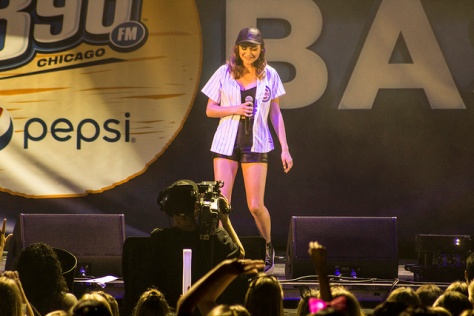