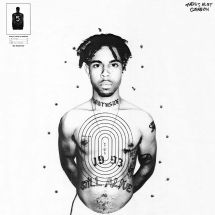 If you would have asked my opinion on Vic Mensa a year ago, it wouldn’t have been positive. As a fan of his since Kids These Days, the youthful and musical Chicago rock/rap outfit that made incredible waves to establish the new Chicago sound that dominates the city now, the quality that drew myself and many others into Vic and his brand was his musicality. He had this ability to effortlessly rap with intricate flows and dynamic lyricism, backed by acoustic and jazzy beats and made an effort to standout amongst his generational contemporaries. Fast forward to his eventual departure from the band and the release of his breakout project INNANETAPE in 2013, and Vic not only found himself as one of rap’s most sought after free agents, but he also found himself in a lane to himself. The potential for crossover appeal to any genre seemed limitless, as the team of collaborators and producers on the tape were an eclectic and promising mix.

In the years between then and now, Vic has gone through a series of transformations and experimental journeys with his music. The whirlwind of events that included collaborating with Kanye West on multiple occasions and signing to JAY Z’s Roc Nation label should’ve produced promising results from Vic as a solo artist, but the truth is, it did the opposite. From a distance, it seemed like Vic found himself bending his sound and biting his sharp-tongue, ultimately dumbing down his material in the name of appealing to the masses and the current rap climate. His slick lyricism was reduced to songs that borrowed titles and motifs from internet memes, (the Skrillex produced ‘No Chill’ and the noisy Kanye collaboration ‘U Mad?’) and the production cues were a lot less inspired and catered more to a pop-rap sensibility. A sizeable chunk of his fans found themselves scratching their heads and feeling disconnected from the guy they initially championed, and as people began to connect the dots and formulate their own conclusions, the truth is, Vic was seen more as a product than a human being.

In his first project in almost three years, There’s Alot Going On is a project that doesn’t really try to revert back to his jazzier ways or even attempt to stand as an apology record. Instead, Vic finds a new sonic balance with the cold, sparse trap-flavoured beats courtesy of Papi Beatz, but lyrically divulges more about his personal life and his socio-political perspectives than ever before. These subjects range from Vic’s personal connections to current events like the Flint Water Crisis or the current epidemic of police brutality against African-Americans, while he also takes time to catch the listener up on his own personal struggles with anxiety, addiction, and depression.

The project opens with ‘Dynasty’, a track that is a frenzied and dizzying showcase featuring some of Vic’s hardest bars we’ve ever heard from him. A looped sample lays the groundwork for an introductory verse, all before a slow build and then a scorching drop into sliding 808s and punchy snares. This formula strikes gold on a few other occasions, especially with the previously released banger ‘Danger’ with an incredible vocal performance from Vic on the hook that is packed full on energy. The raps here aren’t all that impressive though, and the uninspired subliminal shots at Drake are guaranteed to induce an eye-roll or two. However, those moments of dissatisfaction with Vic and his rhymes are a rare sensation on this project, as most of this EP features master-class rapping with sentiments that are truly moving and stimulating.

’16 Shots’ is a militant, iron-hearted response to police and the institutional racism that currently infects the veins of the US government and law enforcement entities. It’s a brilliantly and passionately crafted ode to those young black lives lost, and sympathizes not only with their complexion, but with their families, with their pain, and with their rage. Specifically, the song makes reference to the murder of 17-year old Chicago youth Laquan McDonald, a black male who was ruthlessly shot 16 times by a cop standing three feet away. Laquan was armed only with a knife, and the rounds were emptied out in rapid succession in thirteen seconds. The hook borrows from an iconic hip-hop sample, and is almost designed to be chanted by crowds and protesters alike. It’s verses maintain an interesting balance of quasi-conscious bars while also remaining very violent and combative, a quality that effectively captures the reaction to such a shooting and others like it. The song is everything a socio-politically charged hip-hop song should be—captivating, truthful, and brim-filled with vigour.

Vic’s ability to enlighten the world around him is both commendable and powerful, but the EP’s most potent moment exists in the tape’s final track where he turns the spotlight inward. There’s Alot Going On sees Vic expound on the past couple years he’s had, candidly revealing his battles with depression and addiction. He spills his heart out, exposing all his vices and faults for what they are, whether it’s him taking the responsibility for failed relationships, naming all his vices from adder all to alcohol—it’s a frenzy of chronological moments designed to catch the listener up on what’s been going on between the ears of Vic. It’s a heart-wrenching and humanizing song that floats incredibly well atop Papi Beatz’s brick-hard drums and haunting chords that perfectly ties up this moment, and sets up the next one. It truly seems that “the new” Vic Mensa has really just returned to his old self with a new lease on life and a true sense of poise and purpose, and for someone who was worried a year ago about the future of Vic Mensa, it’s time to admit that this is by far his best work to date.