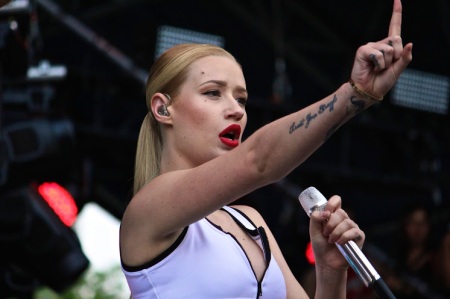 Currently on his Forest Hills Drive Tour, in promotion of his latest album 2014 Forest Hills Drive, J. Cole has changed the lyrics to one of the album’s stand out tracks, ‘Fire Squad’. In the track, speaking on the white takeover of hip-hop, Cole originally raps:

“Same thing that my n*gga Elvis did with Rock n Roll, Justin Timberlake, Eminem, and Macklemore. While silly n*ggas argue over who gon’ snatch the crown. Look around, my n*gga, white people have snatched the sound. This year I’ll prolly go to the awards dappered down, watch Iggy (Azalea) win a Grammy as I try to crack a smile.”

Updating the lyrics for his live performance, Cole now spits “This year I’ll prolly go to the awards dappered down, watch Iggy lose a Grammy as n*gga cracks a smile.” A small change and not much more of a shot at Iggy than the lyric already was, but Cole has to keep his raps current, right? And don’t forget Eminem (who Cole also accuses of stealing black peoples’ sound) still did win the Grammy this year (better than Iggy though). Watch a video of Cole’s ‘Fire Squad’ performance below, and see the crowd get hyped over the lyric switch. Also be sure to catch J. Cole on tour all this spring and summer.