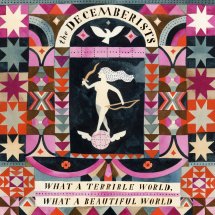 The Decemberists, a group that formed in 2000, has been around long enough to develop a constant sound. They know what their fans expect, and they know how to deliver that exactly. And this shows, not entirely in a good way, in their seventh studio album, What A Terrible World, What A Beautiful World, released January 20, 2015, with Capitol Records

‘The Singer Addresses His Audience’ is a powerful start to the album. It’s an interesting, tongue-in-cheek monologue that critiques the relationship between a band and its listeners. With lines like “We’re aware that you cut your hair in the style that our drummer wore in the video”, it makes its point effectively, and that point is presented as the vocals step up and down in carefully measured increments. All of this happens over well-produced instrumentation, as acoustic guitar and cello give way to electric guitar, kicking drums, and a thundering chorus.

‘Cavalry Captain’ is a solid follow-up track; it is peppy, but not overly so, and the vocals ground it to provide a satisfying experience. However, after these opening tracks, the album starts to run into trouble. ‘Philomena’ is a fun track; surf guitar and harmonies accompany bouncing, drifting vocals through an exploration of relationships and expectations. But it’s also incredibly predictable. And so are the six songs that follow it. At this point, the album takes on a much more pronounced folk sound. ‘Make You Better’ is a template track that feels very familiar; the same goes for ‘Till The Water’s All Long Gone,’ ‘The Wrong Year,’ and ‘Carolina Low.’ The one standout is ‘Lake Song,’ which paints a great bittersweet picture with paced, driving rhythm and subtle instrumentation. Even this one is fairly straightforward, though.

It might be that this predictability is completely intentional. Folk is a traditionally formulaic genre; the chords and vocal progression are fairly fixed, as in blues. However, it also makes for a pretty dull listening experience. Nothing on this album is poorly done, it’s just very flat. This transition also raises a structural issue: What A Terrible World, What A Beautiful World is not a cohesive album. The tracks transition from what feels like the soundtrack to a film or play to predictable and typical folk and then back to a grand soundtrack to finish. It doesn’t know what it wants, and that’s painfully evident in the sheer amount of music on this album. It has 14 tracks, and many of them are just too long; five songs are at or around the five minute mark. Listening to What A Terrible World, What A Beautiful World can feel like a marathon, and by the time the closing track rolls around, you get the sense that you have gone on a journey. This feeling is augmented by the closing song, ‘A Beginning Song,’ one track that actually manages to fill its space and time. It harkens back to the beginning of the album with its quick tempo, and the instrumentation feels effectively big against the vocals.

What A Terrible World, What A Beautiful World is a confusing, confused album. It crams alternative, folk, and something not quite classifiable into one album to see what will stick, and only a few tracks actually do. Those songs might have been able to carry the rest of the album, but there is so much of what seems like filler that they get weighed down and lost. The Decemberists’ newest offering could’ve benefited from addition by subtraction. If they had taken a few risks, decided on a sound, and trimmed down their album, What A Terrible World, What A Beautiful World, could have been a beautiful creation.