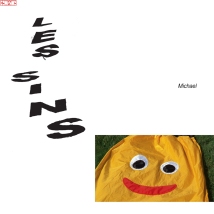 It is a personal, deep rooted, almost religious belief of mine that Chaz Bundick, more popularly known as Toro Y Moi, is one of the few people on the planet that can musically do no wrong. With his latest release under his dance-house moniker, Les Sins, Chaz continues to prove my theory with a release that might lack in innovation, but makes up for it in quality with his first dance project, Michael.

An appropriate disclaimer to establish is as follows: Les Sins is definitely not Toro Y Moi. Where Toro Y Moi was lush and layered, Michael seems a little rough around the edges and not quite as polished. Where Toro excelled with it’s songwriting and brilliant vocals from Chaz, Michael is clearly a beat-driven effort, with little words from Chaz other than ad-libs and vocal samples. Although this might come off as a disappointing revelation, if you take this project for what it is, it’s not hard to see it’s merits.

From the moment you press play, you are greeted with a clever introduction “Talk About” that features a very Causers of This-esque synth, but with a hip-hop inspired bounce, lending a vocal sample from Nas himself. Chaz recently admitted to The FADER that he was “tired of the whole R&B thing”, which becomes very apparent from listening to the record. The bass lines are upbeat, playful and make it a perfect soundtrack for a poorly lit, basement-style hip-hop/dance club somewhere deep downtown. “Bother” samples Chaz himself, once again sporting these bouncy drum-based beats with buzzing synths pulsing not far behind.

“Toy” takes on cinematic twists and turns that is reminiscent of a recent Flying Lotus album-cut, and impresses nonetheless. “Why” with an excellent vocal feature from unknown singer Nate Salman, which is a brighter, more upbeat piece that offers a disco-y vibe that shows to be an interesting juxtaposition amongst the bulk of the album which is smudgy and gritty in contrast. This song definitely sticks out like a sore thumb on the record, as it is the only track that is vocal-based, which Chaz defends with the argument that it is his “Bound 2” of the album. “Call” has a more intense, EDM inspired synth barrage accompanied by a pitched-up croon and a complex, scattered drum beat. The point that becomes obvious as the album hops around is that this definitely wasn’t meant to be cohesive. This record is very bipolar and never keeps one tempo for too long, even inside of the same track. Once again, this may come to a surprise to many Toro listeners who are used to the guided, smoother peaks and valleys of those albums compared to the jittery, joint-popping trajectory of Michael.

Despite it’s unhinged-nature and unpredictability, the record will always make you move. There isn’t not one track on here that wouldn’t make you sway or bob your head, and Chaz definitely emulates his contemporaries and inspirations in an interesting way to make a solid dance project. To offer this as a Toro record would have definitely changed the reaction and perception of it, which makes it very clear why Les Sins exists. It is a way for Chaz to hone his skills and follow his creative control without sacrificing the integrity and sanctity of Toro Y Moi.

Chaz’s latest offering definitely is not as inspired or innovative as his past works, but it sounds like the purpose of this side-project is to express his taste of dance-style beats without diluting and saturating the Toro Y Moi brand. With the release of Michael, Chaz ends up brandishing a new blade just as sharp as those of the past, and continues to show and prove his excellence and growth as not just any experimental artist, but a landmark musical entity.