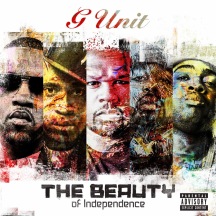 Following the recent trend of surprise releases, soon after the MTV’s Video Music Awards (often one of the biggest days in music), the legendary rap group G-Unit (comprised of 50 Cent, Tony Yayo, Young Buck, Kidd Kidd and Lloyd Banks) released a surprise 6-track EP. The Beauty of Independence gives us another taste of early 2000s rap nostalgia from G-Unit, and even sprinkles in a 50 Cent shot aimed at Jay-Z.

Over a decade since their debut group album Beg For Mercy, released less than a year after 50 Cent’s highly successful Get Rich or Die Tryin’, this album will likely go down as just another surprise project and perhaps the spark that reignited a brief feud between 50 Cent and Jay-Z. The beef between the two can be traced back as early as 1999, when 50 Cent mentioned Jay-Z in his song ‘How To Rob’. Hov responded in his song ‘It’s Hot’, rapping “Go against Jigga yo’ ass is dense. I’m about a dollar, what the fuck is 50 Cents?” While since exchanging lyrics the two have both worked and toured together. However 50 has thrown a number of light jabs at Jay-Z throughout the years. In reference to Jay’s song ‘Big Pimpin’, released after 50’s pimp-themed record ‘As The World Turns’, 50 said in an interview “I don’t know where he got the idea from? I don’t know, maybe if my record was like a pimp record maybe he got the idea from me, but I don’t know where he got the idea from” with a dose of sarcasm. 50 has also called Jay ‘the most overrated hip-hop star of all time’ and spoke about Beyonce confronting him about the beef between the two.

50’s next jab at Jay has arrived with The Beauty for Independence‘s one of two stand-out tracks, ‘Changes’.

“These days (you) can’t believe what you hear on the street. That nigga said he owned the team, he only owned a seat. That’s fools gold he sold to you fools, I watched you buy it. What’s this here? Some kind of new hustle? I might try it.”

Referencing Jay-Z’s involvement with the Brooklyn Nets, Mr. Carter was viewed by many as a substantial owner and face of the organization, however he only owned 1/15th of a percent of the team with a courtside seat. This is certainly more of a shot than his mere reference to Jay-Z in ‘How To Rob’, however this track especially is more than just a jab from one rapper to another. 50 Cent starts off rapping on the piano laced track, speaking about his fall out with Dr. Dre and Interscope’s Jimmy Iovine. 50’s verse on ‘Changes’ is easily one of the highlights on the EP, showcasing 50’s storytelling through music, that we have all loved since Get Rich or Die Tryin’. The most personal track on the album also contains decent verses from the rest of the Unit.

The EP’s second stand out track comes with ‘Digital Scale’. Like ‘Changes’, opening with a verse from 50, ‘Digital Scale’ is the closest thing to classic gangster 50 Cent that we get on the album.

While the other verses are good, yet also reminding us that 50 Cent is still the best rapper and leader of G-Unit, the song lives by its hook, beat and verse by 50. Although he shares a verse on this track, Kidd Kidd’s presence on this song and album wants us to make a substitute for The Game’s return. While Kidd Kidd addition to the group has certainly got him a lot of exposure, perhaps now that he is on our radar he may want to focus on his solo career instead of riding out with a group who is a decade past their prime.

Another notable high point of this album is the number of quality verses by Young Buck throughout the EP, coming in at a close second, behind the verses provided by 50. He may likely be the only returning G-Unit member to have improved in rapping since Beg For Mercy, over a decade ago.

Beyond ‘Changes’ and ‘Digital Scale’ the rest of the short 6-track EP, is full of fillers that sound like they would barely make the cut from Beg To Mercy’s bonus international edition. Perhaps the problem is that the crew is trying too hard? 50 Cent developed a great fan base, because we believed him when he rapped about crime and murder. Now he makes his Vitamin Water money and dates talk show hosts, do we really believe him anymore when he raps about “dead(ing) a pussy nigga” (the title of the album’s fourth track)?

There is also a slew of modern day references that seem too forced. In ‘Watch Me’, the EP’s opening track, Young Buck talks about women ‘doing it for the Instagram’, even in the EP’s best track the group also raps about Instagram and emojis. And some of the lyrics are too outrageous that they are humorous, “I believe I was born to ball. Penetrate the pussy, unless it smells like old tennis balls.” Your group is crowded with legendary rappers who are scared of nothing, and not one member of G-Unit stopped that lyric from making the final version of ‘The Plug’? Also, while I understand that I give G-Unit very little room to succeed, I don’t believe the gangster raps anymore but I also don’t want to hear them rap about emojis, their best recipe for success is to have the raps, beats and hooks to make everything else not matter. Unfortunately they do not do such with this EP.

In summary, if you prefer a grasp at the early 2000s and nostalgia over quality rap music, you may love The Beauty of Independence. However, beyond a couple great tracks (‘Changes’ and ‘Digital Scale’), the EP is not up to par with their 2003 debut (which can be expected). G-Unit’s return has been fun, but the glory days may be behind them. Call me when The Game returns, and even then… we’ll see.

3 responses to “EP Review: The Beauty of Independence | G-Unit”