Unfortunately we all know of the travesty in Ferguson, Missouri, where unarmed teen Michael Brown was shot down by police on August 9, 2014. Ever since that night, those who feel the sting of injustice knowing that Brown was shot at least six times while unarmed have began to protest, both violently and peacefully. While those that are currently situated in Ferguson are protesting, many prominent musicians have also began to protest both physically and through their words. Let us take a look at some of the big names in music currently supporting the people of Ferguson and their cause. 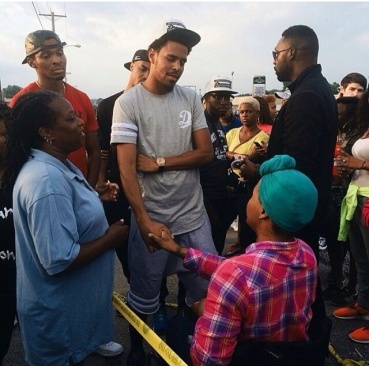 Born Sinner rapper J. Cole has physically visited Ferguson, Missouri, as well as releasing a song lashing out against the unfair killing of Michael Brown and other African American teens by police authorities titled “Be Free“. J. Cole has visited the town where Michael Brown had lived and personally talked to those in the community while trying his best to avoid interviews and photo shoots, stating that he was there for the people and not just there for a photo-op.

Childish Gambino took to Twitter to write a powerful and heartfelt poem about his thoughts on what had happened in Ferguson, Missouri. He expressed throughout his poem that he wishes to truly be a “white rapper” like some claim him to be, and revealed that he himself was once threatened by police with their hands on their holsters. He then said that Twitter activism is “only half of activism” and explained that his poem was inspired by a crying friend and a daunting talk with his mom where she had said to him “When your turn comes, please listen”, in regards to listening to the police before they decide to use lethal force. You can currently read the rest of Gambino’s poem at his Twitter page, located here: https://twitter.com/donaldglover

Talib Kweli is another artist that physically went to Ferguson to bring attention to the cause and to also reveal the brutality that the police authorities in Ferguson are using against peaceful protesters. Talib Kweli had said that his first night in Ferguson, the police told him that “he was going to have his head blown off” and that they had pointed guns at him and threw him to the ground. Kweli had said that he was tired of the way that the media was skewing Michael Brown’s story and that he wanted the truth about the Ferguson police and how they were handling the protests to be shown.

There are many other artists that are currently supporting the Ferguson protests through their music, social media, and even on national television. Until true justice is served, it is safe to say that many will continue to support the Ferguson protests. One life ended far too soon on the night of August 9, 2014, but through protesting and pushing for the reform of the current justice system, many innocent, young lives can be saved in the future.