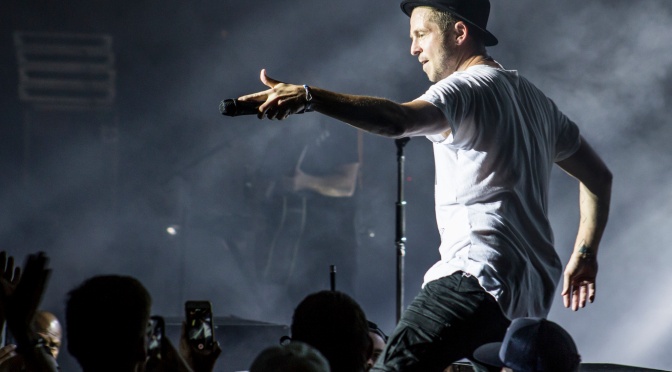 Last night, OneRepublic brought the 2017 Honda Civic Tour to the Ravinia Music Festival in Highland Park, IL. With support from British singer/songwriter, James Arthur, and an energetic set from Indie pop’s Fitz and The Tantrums, from the pavilion to the picnics, everyone left with their money’s worth.

Up first for the night was ‘Say You Won’t Let Go’ singer, James Arthur. With stellar performances of ‘Sober’, ‘Impossible’, his new single ‘Can I Be Him’ and more, Arthur showcased his voice and songwriting throughout his set. While joking about the crowd size, as the sold-out crowd continued to find their seats, Arthur had fun with his audience, before blowing us all away with his hit single ‘Say You Won’t Let Go’. If you’re a fan of Ed Sheeran, you’ll definitely want to give James Arthur a listen.

Next up, the always fun, Fitz and The Tantrums greeted the Chicago-area crowd. Reminding the Windy City that they have been doing shows in Chicago since “Snowmageddon 2011”, the Michael Fitzpatrick led band performed a catalog of their biggest tracks that have been recorded and charted in that time. Highlights of their set included their performances of ‘Out Of My League’, ‘MoneyGrabber’, ‘Hands Clap’ and ‘Roll Up’. Fitz also treated fans with a performance of their next single, ‘Fool’, a ode to all the Mamas and Mamas Boys out there.

However what stole the show was the “real Fitz and The Tantrums”, as Fitzpatrick described them. Joining the stage for the last song, ‘The Walker’, the band’s children danced the night away, as they were doing side-stage throughout the entire set. The children were as adorable as Fitz and The Tantrums are talented, and it definitely was the cherry on top of a great set.

Last but certainly not least, it was time for OneRepublic to close out the memorable night. And right off the bat, the Colorado Springs natives reminded us of their many hits from the past decade and change. With performances of ‘Stop and Stare’, ‘Good Life’, ‘Secrets’, ‘Counting Stars’, ‘Apologize’ and many more, OneRepublic have had a more than successful career, and two sold-out nights at The Ravinia is further evidence of that.

From their entertaining covers, of Ed Sheeran’s ‘Happier, Beyonce’s ‘Halo’ and Adele’s ‘Rumor Has It’, to their breathtaking encore performances of ‘Counting Stars’ and ‘Love Runs Out’, OneRepublic’s set had fans singing along from start to finish. Picking out highlights from the performance is a challenging task, but Ryan Tedder coming into the crowd in only the second song definitely stood out as a favorite moment for many in the audience. The band showed a lot of humility as well, wondering how many fans would show up for a tour after their roughly 2-year hiatus:

“We were nervous about doing this tour. We weren’t sure who was going to show up, and we’re able to do two nights here because of you.” – OneRepublic’s Ryan Tedder

But as far as Chicago and Highland Park are concerned at least, OneRepublic’s Illinois fans are equally happy that the band delivered back-to-back memorable nights to The Ravinia crowd.