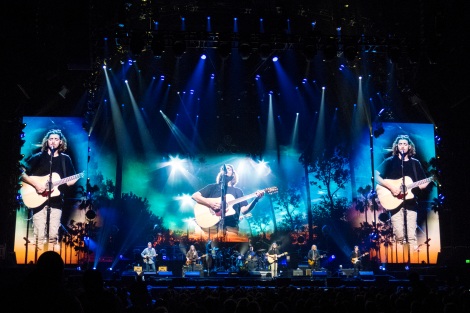 Despite their 1972 single, the Eagles refused to take it easy during their Milwaukee tour stop on Thursday night. With nearly two and a half hours of great music and two very special guest spots, from country music legend Vince Gill and Eagles’ legacy, Deacon Frey (son of the late Glenn Frey), Don Henley, Joe Walsh and Timothy B. Schmit delivered a memorable performance at the city’s brand new Fiserv Forum, one of the first few concerts performed in the $524 million dollar arena.

From the very moments gates opened, fans knew they were in for a special evening. At one point the world thought the days of seeing the Rock & Roll Hall of Famers live were over, after the passing of frontman Glenn Frey in 2016. Fellow co-founder, Don Henley, naturally doubted that the band would tour again. But it wasn’t too long after, that the band found new life and a way to pay tribute to Frey. Not only did Henley, Walsh and Schmit add some star power with the addition of Vince Gill, but the band also helped fill the shoes of Frey by inviting his son, Deacon, for a string of live performances in 2017, shoes that Henley told the crowd on Thursday were very big to fill, to which the crowd rose from their seats to give Deacon Frey a well deserved standing ovation.

With no opener necessary, the Eagles hit the stage minutes after 8:00 and opened with Steve Young’s 1969 track, ‘Seven Bridges Road’. A track which the Eagles have performed for decades, ever since their Eagles Live album in 1980, ‘Seven Bridges Road’ was originally a pre-concert locker room warm up for the band, which is now a staple in the group’s setlist. While the track doesn’t have the notoriety that some of the Eagles’ original tracks have, it was a perfect opening track to warm up the band for the next two and a half hours.

Immediately the classics and hits came, as the young Frey led the band with a performance of the classic record and first single from the Eagles’ 1972 self-titled debut, ‘Take It Easy’. While the Eagles have been performing for nearly five decades, the youthful musician fit in perfectly. Glenn Frey’s oldest son still has some room to grow, as he is still a stranger to such a big stage when compared to the veterans who stood beside him, but he is hitting the ground running with his new gig.

The band then followed things up with more hits and fan favorites, including their records ‘One of These Nights’, from their fourth studio album, and ‘Take It To The Limit’, originally sung by former bass player, Randy Meisner, and now led by the 21-time Grammy winning Vince Gill.

Henley even showed off his sense of humor when introducing Gill, telling the crowd that “Vince and I had some cheese curds before this,” which was certainly a treat for the cheeseheads who filled the arena. While also thanking the crowd for coming out on a school night, Henley’s personality shined from start to finish.

The Eagles continued the momentum with their intoxicating track, ‘Tequila Sunrise’ (from Desperado) and ‘Witchy Woman (from their ’72 debut). Throughout the entire performance the band gave attention to their entire discography, while sprinkling in performances from some of Walsh and Gill’s solo work.

And to cap things off on an already great night, the Eagles said goodbye to Milwaukee with a special encore performance that included ‘Desperado’ and their biggest record, ‘Hotel California’. Needless to say, the Fiserv Forum was such a lovely place on Thursday night.

While the night stood out due to the band’s new additions, of Frey and Gill, and the decades of hits that filled up 26-song setlist, what was most enjoyable was the teamwork the band displayed throughout the show. The Eagles have been through their share of drama, and hostility between members was prevalent for a number of years, yet tonight in their current form, the band was a well oiled machine where no one member shined at the expense of others.

From the young Deacon Frey to Don Henley, everyone on stage last night delivered a great performance. Although the Eagles may be considered relatively tame when compared to Metallica and the Foo Fighters (who performed at the arena Tuesday and Wednesday), if you ask last night’s crowd, Henley, Walsh and company delivered the arena’s best concert yet and they certainly took it to the limit.

Check out our photos from last night’s performance below and get your tickets for the Eagles remaining tour dates here.