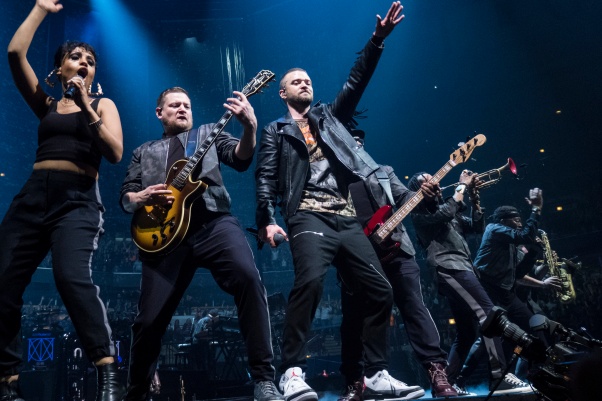 Justin Timberlake brought his Man of the Woods Tour to Milwaukee on Friday night. (Photo not from Milwaukee tour date)

As controversy and speculation brews over the announcement of the next Super Bowl half-time show headliner, the man who kept us dancing throughout his own half-time performance this year, invaded Milwaukee’s brand new Fiserv Forum on Friday night. That man of course being pop superstar Justin Timberlake, the Tennessee native’s Man of the Woods Tour showed us why JT is truly a “man of the people”.

Although there are too many to count, we have our list of the five reasons that Justin Timberlake set the standard for all future pop concerts to come, for the city’s brand new arena. Only the third concert ever at the $524 million dollar Fiserv Forum, Timberlake’s headlining tour was full of hits, laser lights, dance routines and more, creating for a memorable night and a one-of-a-kind experience.

1. The Stage Puts the Typical Catwalk to Shame

With a huge catwalk winding from stage right to all throughout the arena floor, Timberlake’s MOTW Tour’s stage is unlike any other. With a number of B-stages and a bar smack dab in the middle, JT is able to work the stage and make everyone in attendance feel like they have an up-close view of the action (at least for a couple songs). Maroon 5 stepped away from a traditional stage set up a few night ago in Milwaukee, with their unique V-shaped stage that expanded their performance, but Justin’s stage puts Adam Levine’s to shame.

It will be sometime until the Fiserv Forum sees a stage as unique as Justin’s.

As banners dropped from the sky after Timberlake opened his Friday night performance with his Man of the Woods single ‘Filthy’, stunning visuals appeared in the middle of the arena to set the woodland theme for the rest of the evening. These banners were later used throughout the night to display other visuals and live feed from the performance itself.

If you think a massive video board behind you favorite band is cool, this very futuristic addition stole are attention throughout the night and should be a staple in arena performances for artists in the future. And don’t even get us started on the amazing laser show that went on during the performances.

3. The Setlist Combines the Best of the New and the Old

While Justin Timberlake’s fifth studio album (where the MOTW Tour gets its name) was one of the more underrated projects of the year, fans didn’t only come to hear Timberlake perform his latest LP, but of course wanted to hear his huge catalog of hits as well. Lucky for Milwaukee, the fans got what they wanted and JT mixed the new with the old throughout the length of his set. Performing B-sides from the new album one minute, and hits like ‘My Love’ and ‘SexyBack’ the next minute, the entire arena could sing along for the hit singles while also enjoying the best records from Timberlake’s newest album. You won’t hear any NSYNC tracks on the tour, but when it comes to his entire solo career, it’s hard to find a hit track that was left off the setlist.

4. His Intimate Campfire Performance is Worth the Price of Admission Alone

During the middle of the concert Justin Timberlake takes a break from the dance heavy performances to break things down with an intimate campfire for his fans. As him and his band sit around a fire atop logs with their mic or instrument in hand, Timberlake kicks things off with a performance of his 2006 track, ‘Until The End of Time’, before passing the attention to some of his talented backup singers. His singers take on covers of Fleetwood Mac, Lauryn Hill, John Denver and more.

This portion of the set was not only a nice change of pace, but an opportunity for Justin and his performers to slow things down and try to save their energy for the rest of the dancing and singing left to come.

5. “Rock Your Body” Turned the Fiserv Forum into the Club

With so many entertaining performances of huge records, it’s hard to pick one highlight of the night, however that title probably has to go to Timberlake’s performance of 2002’s ‘Rock Your Body’. With the music video for ‘Rock Your Body’ having previously won the MTV Video Music Award for Best Choreography, you already knew that Justin had to save his best moves for the track.

As Timberlake makes his way down the catwalk towards the B-stage bar area, JT steps down into the crowd and dances and sings on top of a huge disco light floor while fans surround him with phones in hand. Throughout the performance you are constantly wondering whether Timberlake is a better singer or a better dancer, because he killed it at both. It doesn’t matter what traffic was like, if anyone left the show before ‘Rock Your Body’ (or early at all), they messed up royally.

The Man of the Woods Tour isn’t one to miss, from beginning to end!

Get your tickets for the remaining dates of the Man of the Woods Tour at Justin Timberlake’s official website.