Since replacing the RCA Dome in 2008, Indianapolis’ Lucas Oil Stadium has hosted a number of great concerts since breaking ground. While Kenny Chesney held an informal monopoly on concerts for the venue’s first eight years, One Direction and U2 have also delivered memorable shows at Lucas Oil for their Indiana fans. Concerts at the stadium are rare and reserved for the biggest names in music.

Saturday night was no exception to this trend as Taylor Swift delivered arguably the best concert in the stadium’s decade-long history. As part of her critically acclaimed Reputation Tour, the 10-time Grammy winner not only broke domestic records with her new tour but now also holds the attendance record for Indy’s downtown stadium, with her thirteenth ever performance in the city (13 of course being Swift’s lucky number).

Numbers don’t lie either, because Saturday night’s performance was deserving of the massive number of fans who passed through the turnstiles to watch music’s biggest pop-star perform. From the tour’s grand set design to the delicately organized set list, you can call it what you want but the performance was beyond comparable.
And if Taylor Swift wasn’t already a big enough name to fill the concert’s marquee, Swift brought along Charli XCX and MTV’s VMA Artist of the Year, Camila Cabello, along for the ride. 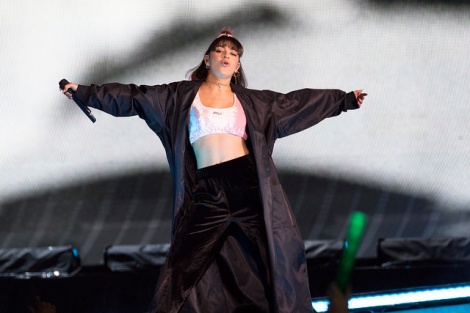 Up first for the night, as fans began to fill the $720 million dollar stadium and find their seats, English singer/songwriter Charli XCX put on a 7-song performance to reward fans for showing up on-time. The set was short but sweet, as practically every song the 26-year-old singer performed was a hit. Opening up with 2014’s ‘Boom Clap’ (from the movie “The Fault In Our Stars”), hits like ‘I Love It’, ‘Break The Rules’ and ‘Fancy’ kept the crowd moving.

Up next to the stage was an artist who will be headlining stadiums of her own in no time. Despite years of experience from her time with Fifth Harmony, the newly solo Camila Cabello has hit the ground running after announcing her departure from the pop group, which has since announced an indefinite hiatus in pursuit of solo careers.
In just about a year’s time, Cabello delivered the song of the summer with her breakout single ‘Havanna’, released her self-titled debut album and recently took home MTV’s Video Music Awards for Video and Artist of the Year. While pop stars typically grind for years before experiencing massive success, Cabello’s notoriety with Fifth Harmony and addictive tracks have helped her grow at an unprecedented speed.

The sky’s the limit for the ‘Never Be The Same’ singer and Saturday night was evidence of just that. Performing the majority of tracks from her 2018 debut, Cabello’s vocals and talented displays of dancing are what stood out the most, all making for an A-list pop-star.

While tracks like ‘Never Be The Same’ and ‘Havana’ (which opened and closed her set) of course had the crowd singing along, B-sides like ‘She Loves Control’ and ‘Inside Out’ were personal favorites. As an opener, her current show is perhaps better suited for a smaller stage, but Camila still delivered a great performance and is more than capable of entertaining huge live audiences.

Following Cabello’s performance, crew finished setting the stage for the night’s headliner and promotional videos displayed for fans to pass time and speed up the lulls between sets. Although these were just small touches on the tour, the videos put Taylor’s personality and her relationship with her fans on display.

You could feel the anticipation of fans heighten as Taylor Swift was set to deliver her biggest performance in Indianapolis yet. It wasn’t long ago when Swift sold out the Bankers Life Fieldhouse, just a half a mile northeast of Saturday’s concert, and fast forward three years later, Taylor Swift is still the biggest artist in the world, yet performing for an audience over three times the size of her sold-out Indy crowd in 2015. Where you’d expect diminishing returns, Swift continues to find ways to grow exponentially.

Then as Joan Jett’s 1981 track ‘Bad Reputation’ played throughout the stadium and set the theme for Swift’s performance, soundbites from reporters then supplemented a montage displayed on the stage’s giant 100+ foot screen. Comments like “she holds too many grudges” and “I felt like she was a little angry” serve as the fuel to the fire seconds before Swift steps on stage, keeping the singer motivated throughout her 53-date world tour.

Next, with echoes of past criticism filling the entire stadium, Swift was ready for a performance unlike any other that Indianapolis has seen. Fittingly, the video boards parted to the side and Swift then emerged to her Reputation single ‘….Ready For It?’, to which her Indiana fans emphatically answered “Yes”.

The concert’s opening moments are indicative of most of the night, as Taylor and her dancers move across the entire stage and it’s two catwalks while entertaining choreography and hit records keep fans on their feet. And while Swift checks all the boxes when it comes to the main components of a great stadium show, many smaller aspects of the tour serve as the cherry on top. Whether it’s the bracelets (which fans will remember from the 1989 World Tour) that light up the night or the Reputation Newspaper confetti that falls from the sky, the tour’s attention to detail is great.

With this go big or go home mentality, it’s no surprise that it takes nearly 100 semi trucks to move the tour from city to city, enough rigs to cause a traffic jam of their own.
After a strong start, with tracks new (‘Gorgeous’, ‘I Did Something Bad’) and old (‘Love Story’, ‘You Belong With Me’), the first big surprises for fans came during ‘Look What You Made Me Do’. During the bridge, as Taylor sings “I don’t trust nobody and nobody trusts me”, a giant king cobra rises to a height of 40 feet. With snakes serving as an informal mascot for Reputation Era Taylor, the Swifties in the audiences certainly loved massive prop.

A second “guest” (if you will) for the song came at the end of the bridge as the phone rang and actress Tiffany Haddish appeared on the video screen to sit in for Taylor for the tracks’ infamous line: “sorry the old Taylor can’t come to the phone right now. Why? Cause, she’s dead!”

Although the concert gets off to a great start from the very beginning, and ‘I Did Something Bad’ (her second track of the night) is a personal favorite among all the performances, the night’s momentum reaches a whole new level from ‘Look What You Made Me Do’ and beyond.

With strong tracks like ‘End Game’ and ‘King of My Heart’ following ‘LWYMMD’, Swift makes her first departure from the main stage via a floating platform while performing her current single, ‘Delicate’. As the track finishes, Taylor’s next stop is one of two B-stages. And it’s almost insulting to label them as such because although the stages dwarf in comparison to the main stage (her largest stage yet), they are both comparable to the size of her main stage on the 1989 Tour.

Despite selling out the biggest stadiums in the world, Swift covers as much real estate as she can in the venues, turning a huge production into an intimate show. There is literally no bad seat in the house for this one.

If you were closest to the stage-right B-stage though, you were in luck as this act of the concert is the best for many reasons. The first reason is that Swift kicks thing off with her mega-single ‘Shake It Off’ and she doesn’t do it alone either, as Camila Cabello and Charli XCX stick around to join in on the fun.

Next, Swift strips things down for an unforgettable acoustic portion of her set. Performing her Reputation track ‘Dancing With Our Hands Tied’ and her 2008 song ‘Forever & Always’ (a song performed special on the tour for her Indy fans), Swift slows things down and shares some special moments with the crowd.

After a few great performances, Swift then makes her way to the second of two B-stages for another huge single, ‘Blank Space’, as well as Reputation’s most risque record, ‘Dress’.

After her time at the B-stages, Swift floats on back to the main stage with a perfect mash-up of two tracks you would have never thought meshed so wonderfully, with 2016’s ‘Bad Blood’ and 2006 ‘Should’ve Said No’, a country record from Taylor’s self-titled debut. Although a decade and different genres separate these two tracks, it’s as if they were written and recorded as a pair. 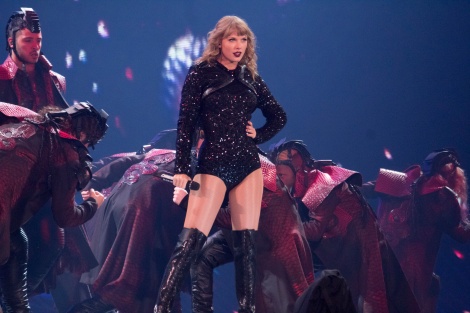 With the final stretch of her set nearing, Swift kept her fans engaged with more songs from her newest album, including ‘Getaway Car’, ‘New Year’s Day’ and ‘Call It What You Want’.

Then, to cap off an already memorable night, T-Swift ends the performance with two especially strong performances, one old and one new, but both showcasing her tough, confident and sometimes unforgiving frame of mind. The first being ‘We Are Never Ever Getting Back Together’ and the second being ‘This Is Why We Can’t Have Nice Things’.
Fireworks filled the Indianapolis skyline for the set’s finale and smiles spread across the Lucas Oil Stadium. There was no need to beat traffic that night, because enjoying every last second of the night far outweighed getting home as fast as possible. In fact, we’re sure the ushers had trouble herding fans out the door, as Swifties grabbed their final selfies to remember the record setting night.

It’s almost to impossible to imagine how Taylor Swift could grow after her beloved 1989 World Tour invaded Indianapolis a few years ago, and yet Swift managed to exceed even the highest of expectations.

We’re not sure how Swift can top herself with her next world tour, but we certainly know better than to doubt her.

Setlist
…Ready For It?
I Did Something Bad
Gorgeous
Style
Love Story
You Belong With Me
Look What You Made Me Do
End Game
King of My Heart
Delicate
Shake It Off
Dancing With Our Hands Tied
Forever & Always
Blank Space
Dress
Bad Blood
Should’ve Said No
Don’t Blame Me
Long Live
New Year’s Day
Getaway Car
Call It What You Want
We Are Never Ever Getting Back Together
This Is Why We Can’t Have Nice Things