Hoodie Allen returned to Milwaukee Saturday night, as the Long Island native brought his headlining The Hype World Tour to The Rave, with support from Myles Parrish and Luke Christopher.

And while it seems like it’s been awhile since Hoodie blessed the stage for his Wisconsin fans, the ‘No Interruption’ rapper is no stranger to The Rave. Allen has performed a number of memorable shows at the infamous venue, including visits for his People Keep Talking Tour, his Cruisin’ USA Tour and of course his 2012 co-headlining tour with G-Eazy.

Having just kicked off The Hype World Tour days ago, Hoodie’s Milwaukee fans got an early taste of the tour and were some of the first in the world to hear cuts from Allen’s brand new and self-released album, where the tour gets its name and which dropped just a couple weeks ago on September 29th.

Throughout the night, Hoodie Allen performed a perfect mix of tracks, both from his new album and his biggest singles and fan favorites from his previous albums and EPs, including records like ‘Know It All’, ‘Sushi’ and ‘All About It’ to name a few. What made the selection of tracks so perfect was likely the fact that the fans themselves chose the setlist for the show, when Hoodie gave fans the opportunity to play a role in the tour by creating an online poll for each night’s setlist. Although time wouldn’t allow Allen to perform every single song he has ever recorded, you can bet that everyone in the crowd left as a happy camper.

It wasn’t just the songs that made last night so great, as Hoodie Allen delivers an exceptional amount of energy into his live performances. You may not find the production level that a high budget arena tour may offer, but Hoodie Allen works the crowd like none other. And what better cherry on top, than to bring a inflatable raft onto the stage and float throughout the packed crowd?

From start to finish, Hoodie Allen gives his all to his fans on stage and off, so it’s no surprise that Milwaukee and The Rave continue to embrace Hoodie Allen throughout the years.

Check out our photos from last night’s performance below, and get your tickets for the remaining dates of the The Hype World Tour here. 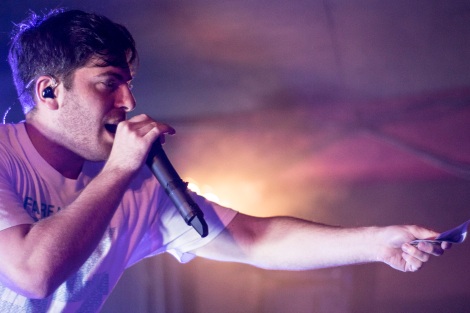 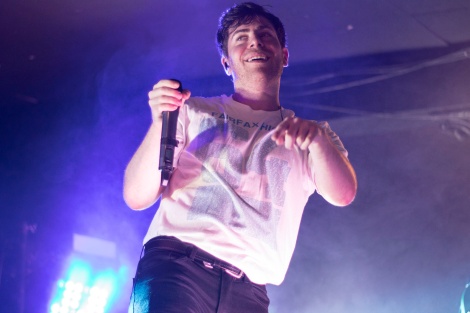