M&M’S delivered a great night of music and chocolates to the Chop Shop last night, as part of their M&M’S Spotlight series. Following their New York concert with DNCE at the Brooklyn Bowl, the first of the series, this time M&M’S invited Grammy-nominated singer/songwriter Carly Rae Jepsen to the Windy City to give her fans a unique concert experience that they would not soon forgot.

With mounds of every type of M&M’S you could dream of, a photo booth to capture the night with friends, virtual reality experiences and of course a free concert from the ‘Call Me Maybe’ singer, the pop-up concert was a big success.

Although Carly Rae wasn’t scheduled to perform until 8PM, fans got to share a very special moment earlier in the evening as M&M’S announced a “raffle” for a free VIP upgrade. Unbeknownst to the winner and the audience, this contest was staged from the beginning. Soon after the winner went on stage to claim his prize, his boyfriend joined him on stage, grabbed the microphone and got on one knee to share his feelings in front of the sold-out crowd. The fan told his boyfriend that “sometimes somebody else can explain how you really feel, better than you can”, right before he quoted Jepsen’s hit single, ‘I Really Like You’, and proposed to his boyfriend. The two sealed their engagement with a hug and a kiss as the audience applauded for the happy couple.

Moments later, it was time for Carly Rae Jepsen to step on stage. Opening with her 2008 track, ‘Runaway With Me’, Jepsen kicked off her set on a high note, and then took time to thank M&M’S and show love for the city of Chicago. Jepsen followed with a variety of tracks from her debut LP, her 2012 album Kiss, and of course a number of records from her latest album, Emotion. And although the entire audience was full of Jepsen’s biggest fans, who sang every word and earned their spots by waiting in line for several hours before the doors opened, the highlight of Jepsen’s set came at the end.

Performing her hit singles ‘Call Me Maybe’ (which Jepsen dedicated to the newly engaged couple) and ‘I Really Like You’, to cap a wonderful night as colorful balloons fell from the sky, Jepsen’s great performance left her fans begging for one more song. Although a setlist we uncovered before the performance didn’t call for a scheduled encore, Carly Rae and her band heard the chants from backstage and blessed her fans with a true impromptu encore performance. The song that Jepsen settled on backstage? Her Owl City collaboration, ‘Good Time’, which couldn’t have been any more fitting for how the night went.

Check out our photos and the setlist from M&M’s Spotlight with Carly Rae Jepsen below. 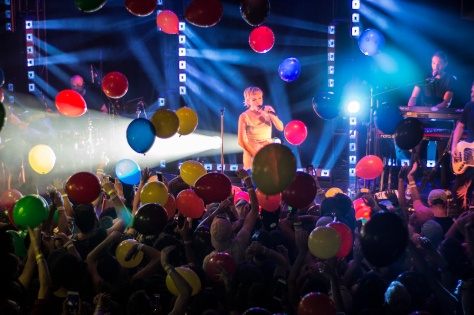