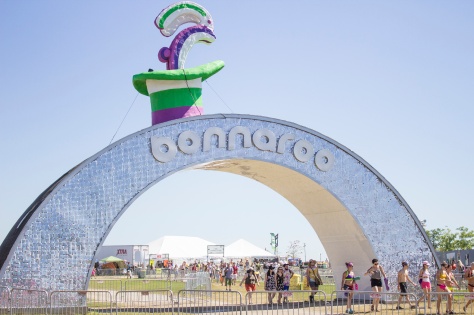 Last year the Bonnaroo Music & Arts Festival experienced a sleep decline in ticket sales. According to numbers obtained by the Nashville Tennessean, 2016 attendance came in at just over 45,000, a huge drop from 2015’s attendance of roughly 70,000. And while the difference between 2016 and 2015 was especially large, ticket sales have been declining for the past few years.

So what’s the problem? Are the lineups dropping in quality? Is there too much competition in the music festival arena? Is music just not as good as it once was? To all the above, I would answer in the negative.

First, Bonnaroo has put together great lineups year after year. The Farm‘s lineup in 2016 not only was great, but it certainly wasn’t nearly a 50% drop from the lineups of years past. In 2016, Manchester saw performances from Pearl Jam, Dead & Company, J. Cole, LCD Soundsystem, Ellie Goulding, Macklemore, Tame Impala, Death Cab For Cutie, Chance The Rapper, Miguel, Chris Stapleton, Leon Bridges and many more. From top to bottom its lineup was great and arguably rivaled that of Coachella, Lollapalooza and any other lineup from last year.

But maybe there is just too much competition, right? I don’t think so. Although there are many more quality music festivals today than there were a few years ago, for the most part, all of these festivals are doing well for themselves. Of course not all of these music festivals will survive the tests of time, but for now, there are enough music lovers to go around. Just because Governor’s Ball is doing its thing in New York, doesn’t mean that Bonnaroo fans are going to jump ship. No one lives in Manchester, TN, the town multiples in size when Bonnaroo comes to town, people have been and will always be willing to travel for great music, and an increase in the number of music festivals will not stop that.

So then music must not be as good as it once was? Wrong again. Again, music festivals are bigger than ever and music is just as good as it has ever been. Yes, some people don’t like “mumble rap”, but to say that there aren’t enough quality musicians out that are worth our money to see live is crazy.

Then what’s the issue? Why is Bonnaroo seeing a decline in attendance? Honestly, I have no ideas. I can point to a number of things, and maybe I’m even wrong and it’s a combination of all the reasons that I just argued against, but the question shouldn’t be focused on the problem, rather we should look for a solution.

And the solution I offer, is without a doubt, not at all the problem. Bonnaroo needs to sell out…well, technically but not really.

One thing Bonnaroo is known for is its stage names. Throughout the extended weekend of Bonnaroo fans hop back and forth from the “What Stage”, the “Which Stage”, the “This Tent”, the “That Tent”, and last but not least the “Other Tent”. People either hate it or love it, but it’s definitely part of the Bonnaroo brand. But besides making fans extremely confused at times, the real problem is Bonnaroo’s huge missed opportunity.

Why have the “What Stage” when you can have the AT&T Stage? Why have the Other Tent when you can even have the “Diva Cup Tent”? Who cares what the sponsor is, as long as they pony up a lot of money? And sure, you don’t want your favorite music festivals to “sell-out”, but what does it matter at the end of the day what a stage’s name is. Look all around the next time you’re at a music festival, they whore themselves out to sponsors all the time, but to everyone’s benefit. I don’t like Panda Express, but if I get to cool off in the “Panda Express Mist Tent” than we all win.

One music festival who recently made a big move to improving itself through corporate sponsorship is Milwaukee’s Summerfest, the World’s Largest Music Festival. For years, the Wisconsin-based Marcus Corporation was benefiting off an arguably bad contract, where Marcus reportedly was paying just a few cents on the dollar for naming rights to the festival’s largest stage. In 2017 however, the Marcus Amphitheater has become the American Family Insurance Amphitheater, and as a result Summerfest will be getting a brand new 30 million plus amphitheater in the near future. While it’s not public what American Family is paying specifically for the naming rights, you can certainly assume its a hefty increase. Not only can that money go to renovations, but it can go to increasing the budget for big name performers as well.

There is probably no festival though, that does it better than Lollapalooza. While most of us have never done the books for a major music festival, if you’d ask people what is the biggest cost of running a music festival, a lot of people may say the money that it takes to book the artists. Believe it or not, the artists don’t come for free. Even when musicians take a pay cut to perform at a festival, they still collectively take an enormous chunk out of a festival’s budget… unless your festival is Lollapalooza. By taking in millions for corporate sponsorship naming rights, Lollapalooza is able to keep ticket prices lower and book better talent than they certainly would be if they were doing it alone. If you loved Lana Del Rey’s performance at Lollapalooza last year, even if you prefer Redd’s Apple Ale, you better thank Bud Light.

For years Lollapalooza founder Perry Farrell attempted to limit corporate sponsorship, but as the sponsorships doubled from $574 million a year to $1.17 billion from 2003 to 2010), Lollapalooza dug itself out of a hole and solidified its spot as one of the world’s elite music festivals. Bonnaroo still remaining as one of the elites, in terms of notoriety, but it may be time to follow in the footsteps of Lollapalooza and ditch the confusing stage names and cash in on the big missed opportunity.

Bonnaroo is still one of the best music festivals around. It’s not only historic, but it’s a one-of-a-kind experience unlike all other music festivals with its diverse mix of entertainment. Where else can you see some of the biggest A-list names in music, learn about Tennessee culture, and share some laughs with friends in the Comedy Tent?

But if Bonnaroo wants to get out of this slump, and give people no other choice than to drive to Manchester because it’s lineup by far trumps all others and the ticket prices are more than reasonable, than it may need to “sell-out” a little and trade some naming rights of stages for some extra cash.