Last night, Tory Lanez gave a beyond memorable and energetic performance at The Rave for his biggest Milwaukee fans, on his headlining I Told You Tour, named after his debut album which released just months ago. Joined on tour by Atlanta singer-songwriter Jacquees, Kranium and Chicago’s Taylor Bennett, Lanez was in great company and set for a pre-Thanksgiving show that Wisconsin would not soon forget.

And after the three opening performances set the tone for the man of the night, it was time for Tory Lanez to greet the packed crowd. To no surprise, Tory Lanez’s set included a number of performances from his brand new debut LP, a long awaited album that gained Lanez a lot of attention thanks to his breakout single ‘Say It’. And while fans were rapping and singing along to performances of Lanez’s tracks which were record well before ‘Say It”s commercial success, Milwaukee went crazy when Lanez performed his big name singles like ‘Say It’ and ‘Luv’.

Other highlights of the Canadian artist’s performance included his performance of ‘To D.R.E.A.M’, and of course his up-close-and-personal interactions with the audience. Lanez finds a second home in the middle of his crowd, practically crowd surfing and having fans lift him up towards the sky as often as he was on the stage itself. At one point during his performance, Lanez went into the crowd, had fans lift and guide him towards the side, and at that point Lanez had his fans lift him up so he could extend his reach to a light fixture about 15 feet from the ground, Lanez then climbed that fixture and again extended his reach, this time to fans in the second level balcony. The excitement didn’t stop there either, moments later, Lanez hung upside down from the balcony railing, all while rapping throughout. While many artists before have gone into their crowds, Lanez brings it to a whole new level, and it’s just one of the many reasons that his Milwaukee fans got their money’s worth.

See our photo’s from last night’s performance below, and check out the remaining dates on Tory Lanez’s I Told You Tour here. 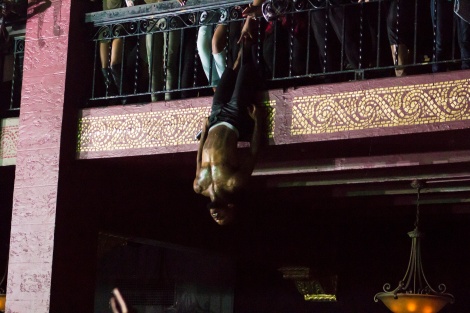