In support of their new studio album, PersonA, indie-folk band Edward Sharpe and the Magnetic Zeros brought their summer tour to the Pabst Theater in Milwaukee, WI. Following their memorable 2015 performance at the city’s lakeside festival, Summerfest, the sold-out crowd was more than excited to see the talented indie favorites, and they didn’t travel alone either. Joining the band tonight were Los Angeles-natives and alternative rockers, Harriet. While Harriet introduced themselves to many in Milwaukee tonight, the guys certainly picked up a number of new fans with performances from 2014, What’s Mine Is Yours EP.

Following Harriet’s opening performance, it was time for Edward Sharpe and the Magnetic Zeros, led by singer Alex Ebert, to hit the stage. The Up from Below artists emerged on stage with the house lights on, waving to fans while Alex shook hands and even signed a young woman’s vinyl. Soon after, they opened their set with a performance of their PersonA track ‘Somewhere’. As expected, the band performed the majority of their new album, which released just last month. Perhaps the highlight of the night came though as Edward Sharpe performed their biggest hit single to dates, ‘Home’. Although the band wasn’t joined by former member Jade Castrinos, the lead female singer on ‘Home’ who parted ways with the band in 2014, it didn’t matter because Alex Ebert and company gave 110% into the performance.

If you go into an Edward Sharpe concert thinking that ‘Home’ is their only record, you couldn’t be any more mistake. The 1,000+ in attendance tonight can personally vouch behind the live performances and studio recordings of Edward Sharpe and the Magnetic Zero’s PersonA, their fourth studio album. ‘Home’ has certainly survived as the band’s stand out song to date, but tracks like ‘No Love Like Yours’ and ‘Let It Down’ have definite potential to be the group’s next breakout track.

What was even more impressive was Ebert’s relationship with his audience. Instantly as he greeted the crowd he paid tribute to the beautiful Pabst Theater, and told fans how his father performed there as an actor many decades ago. Throughout the night the band took multiple song suggestions from the crowd, Ebert would sit down with the crowd, even letting audience members tell their favorite jokes while the rest of the band prepared their instruments, and even small things like Ebert’s eye contact with audience members made the performance an especially intimate and memorable one. Whether you know every one, one song, or none, everyone can leave an Edward Sharpe concert having a great night.

Check out our photos from tonight’s performance below and check out the remaining dates for the tour here. 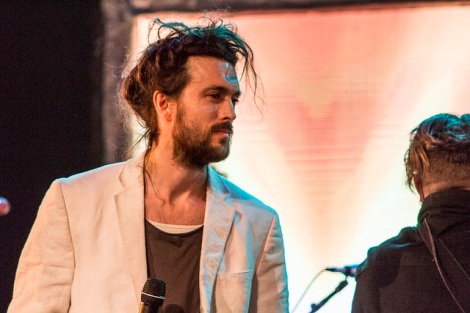