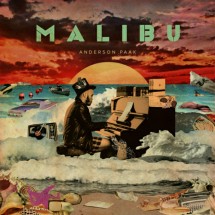 Yes, Anderson .Paak’s visibility undoubtedly skyrocketed after frequenting on a range of tracks from the latest Dr. Dre release, Compton. His performances served as acclamatory additions to everything he touched—his rasp gripping the funky-foundations of Dre’s signature bass-lines,   and even his successful attempts to dabble in raps with poignant bars and butter-smooth flows. His real breakout, though, came in the form of his 2014 debut, Venice, an album that flew under the radar and really didn’t gain any traction in the mainstream music circus. It might not have been as cohesive or as intimate as most great debuts are, but it was still an excellent showcase of Anderson’s range and ability to make you feel, and make you dance. The record borrowed from modern textures and spat back out sounds that weren’t too far away from the Soundcloud landscape of the time, yet Anderson’s voice and unconventional writing style made the record standout enough to be memorable, and enjoyable.

This time, with the world watching, Anderson’s first swing at the ball is a meticulous, experimental, and confident release featuring some of the most feverish, suspenseful, and groovy funk tempos heard since Kendrick Lamar’s dissertation on West-coast rap and P-funk in To Pimp A Butterfly. Malibu is breezy and fearless with Anderson .Paak sharply synthesizing his new-school takes on old-school sonic muses, all with the help of his signature, one-of-a-kind vocal abilities. Unlike his debut, .Paak enlisted the help of many varied yet established producers to add to Malibu’s vision. More contemporary guys like Kaytranada and Dem Jointz provide their own signature futuristic bounces, and legends like DJ Khalil, Madlib, and 9th Wonder pull the record back down to Earth with familiar textures. It’s a much more energy driven, electric take on D’Angelo’s modern classic Voodoo, with .Paak pivoting from retrospective personal stories to the gritty emotional subtexts of sex, back around to his come-up stories in music—all while remaining cohesive and incessantly brilliant.

Anderson’s storytelling on this record is incredibly gripping and engaging. He’s privy to the fact that there’s a massive array of new listeners who view him as somewhat of an enigma, and yet he doesn’t play into this with being overtly revealing or fishing for any sense of empathy in an attempt to be relatable or intimate. In fact, the details of his past life are either being unfolded by way of his ability to explain stories as if you were catching up with an old friend, or are being used as high quality bars ending with a Anderson delivering them with a brazen scowl. On ‘The Waters’, Anderson even reflects on the lukewarm receptions of his first projects not by admitting defeat but by boldly stating “Volume one was too heavy for you frail niggas/So I got leaned like codeine and pills”. By never really allowing the details of his life to be up for interpretation, he’s naturally setting the record straight  and conveying the only POV that matters about every situation he finds himself describing. Similarly, Anderson leans on his own personal experiences to illustrate the more macro images of racial and socio-political issues very matter-of-factly. On ‘The Season / Carry Me’, Anderson reflects on his own intimacies with lines like, “When I look at my tree, I see leaves missing/generations of harsh living and addiction”, while also providing social commentary, spitting, “Your mom’s in prison, your father need a new kidney/You family’s splitting, rivalries between siblings/If cash ain’t king it’s damn sure the incentive”. Achieving this balance, Anderson is able to be a compelling writer without solely existing in the frameworks of his own head.

Musically, Malibu is a riveting experiment in song structure and pseudo-improvisational progressions. Structurally, many songs borrow from tracks like ‘These Walls’ or ‘Institutionalized’ off of Kendrick’s last LP, with songs starting with one vocal idea or melody and then expanding and contracting over the next couple minutes as the perspectives or emotions of the story change. ‘Your Prime’, for instance, begins as a breathy and melodic piece, soothing and gently serenading for some minutes on end all before cascading into a drum-laden, explosive bounce. ‘Silicon Valley’ maybe offers the most interesting progression on the record, with .Paak riding the minimal foundation of a simple 808 and a sparse bass-line, all as it builds into this lush, horn-driven, stuttering beat journeying into more pathways of melody and jazz. It’s honestly a lot of influences jam-packed into one track, but it never seems encumbered with the various sounds at any point. The narrative of this record is equally as enthralling, with Anderson describing his experience of trying to love a typical, fake-tittied woman that might come from the Silicon Valley, at one point interrupting Anderson’s romantic monologue as they’re presumably knee-deep into foreplay with “Will you fuck me already?!”

With Malibu, Anderson .Paak has undoubtedly snatched the reigns of West-coast soul, and proven why his scratchy growl belongs to be ranked among the best of today. Enlisting lyrical beasts like The Game, Talib Kweli, Schoolboy Q, and Rapsody throughout the project, .Paak is able to offer Malibu as this unique hybrid between soul and hip-hop, a combination rarely visible in today’s climate. Anderson doesn’t necessarily need features to pull this off, though, as not only is his voice one-of-a-kind, but he’s also a sharply witted rapper with an innate sense of flow and confidence. As the cover art accurately suggests, Anderson .Paak has pieced together a brilliant sounding mosaic of influences new and old, creating a record serving as the perfect palette cleanser to start the new year. Malibu is Anderson’s bold entrance into the big leagues, and if he continues to innovate and be nothing short of himself, he’s going to be here a while.