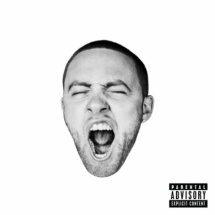 Let’s start off with a little truth: Mac Miller can be credited with the biggest 180° concerning credibility in modern hip-hop history. Not only did he sonically relinquish the fraternity bro-rap sounds of his former years and venture into experimental, drugged out, potent hip-hop, Mac Miller also grew into one of the best producers of the past couple years, working on his own music as well as others. His studio back at his old mansion in the LA area is attributed to the growth and stimulation of the upswing of many rap careers. When Mac wasn’t swinging his own home-runs with his individual projects under different monikers to denote differing genres, he was producing for and collaborating with other people, making incredible moments with guys like Earl Sweatshirt, Vince Staples, and even Future.

However, Mac Miller’s crowing achievement and his greatest project to date was 2014’s Faces, an eerie yet bizarrely entertaining ride down the tunnels of the famed male ego. This mixtape starts with a hot burn and sizzles to an increasingly depressing, emotive and touching end, content wise bleeding dry the nitty gritty of Mac’s recent journey with drugs, depression, and musical madness. Fast forward to today, and Mac’s got a cash-induced glow about him coming off the heels of a $10 Million deal with Warner Brothers after being the indie-rap mascot for ages, he’s got a girlfriend, a cat, and on the very first song off his brand new album released just days ago, he declares, “I’m not saying that i’m sober, i’m just in a better place.” That place is the universe of GO:OD AM, his second full length studio effort that is his most crisp, lush, and polished record yet.

The title and theme touches on a few things, but mainly alludes to Mac being woke, following what one could assume to be one of the darkest periods of his life. Mac’s message is loud and clear on this one, that he’s awake and he’s ready to put his past behind him. We are lulled into a dream state with one of the prettiest, most serene Tyler, the Creator beats we’ve ever heard and Mac touching his lightest notes on ‘Doors’, which then spears right into the real intro and our first slapper on the record, ‘Brand Name’. It cleverly begins with the sound of an alarm clock, and trembles with a bouncy baseline until Mac unfolds it with bars about happiness, materialism, and his self-made nature.

The precedent for the sonics on this record have already been set—hugely vast, pure, and slamming instrumentals. If you’re searching for the dark, murky, sample heavy instrumentals of his producer-extraordinaire alter ego Larry Fisherman, you’ll be sorely discouraged—Mac doesn’t touch the boards on a single song on this album. Instead, he distances himself from his last group of projects all produced by him by reaching out to worthy replacements like ID Labs, DJ Dahi, FKi, THC and Christian Rich. This adds a refreshing diversity to the record, with softer, floating tracks like ‘ROS’ and ‘Ascension’ being able to seamlessly coexist with bruising bangers like ‘Cut the Check’ assisted by Chief Keef, and ‘When in Rome’. The former sees both Mac and the Chicago-drill legend rhyme with incredible precision and effectiveness, with one of Keef’s most audible, coherent and sensical verses yet.

The album is incredibly sobering and reflective while also playing the role of the major label debut. There is enough accessibility with tracks like a surefire pop favourite ‘Weekend’ with Miguel, and then there’s enough obscurity and bars within the cuts like the very based collaboration ‘Time Flies’ and ‘Two Matches’ with Ab-Soul. Mac is most impressive though when he attempts to incorporate this dichotomy on a single song, with a track like ‘Clubhouse’ being a perfect example. It’s catchy enough and repetitive enough to get stuck in a passerby’s ear, while also being satisfactory from a strictly lyrical perspective. Lead single ‘100 Grandkids’ plays a similar role with a theatrical introduction and a menacing beat switch as it turns into a polished trap banger before it fizzles out. While it’s not a continuation of the emotional vulnerability we were swept off our feet by in Faces or the obscure, drugged out psychedelic sound of Watching Movies, this album appropriately sounds like the hazy, half asleep raps of Mac’s recent projects have woken up with a sobering, caffeinated bounce.

GO:OD AM has a little bit of everything for everyone—it’s bouncy and airy enough to be set next to his bro-rap past, it’s not completely sober enough be removed from his last few psychedelic projects, and it’s refreshing enough to be a mark of progression for young Malcolm. It attacks fame, money and bitches with a rearview mirror outlook rather than being suffocated with his vices, and offers all kinds of variety with delicate ballads, gliding cloud-raps, and hints of Heatmakerz and Dipset charged bangers. Major label Mac is nothing to be afraid of—instead, it’s a pleasant surprise that Mac has been able to master the balance of pop relevancy and hip-hop credibility. This is Mac’s hardest right hook he’s ever thrown, and it’s definitely a knockout. For those still sleeping on Eazy Mac: It’s time to wake up and smell the damn coffee.