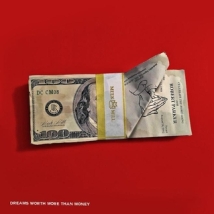 Prior to last week, it was safe to say that Meek Mill was not an album guy. His MMG debut, Dreams and Nightmares was a flop of sorts, crammed with deflated bangers with uninspired sounds and hooks, drab features, and boasting nothing more than some decent mixtape leftovers and an epic, even classic introduction track. The truth is, Meek Mill was signed as (and remains to be, to an extent) a mixtape artist—one that thrives on the boundless possibilities of unmastered tracks with uncleared samples, with a screaming DJ Drama positioned beside him. On the road to his sophomore release, not only did Meek seemingly have to address criticisms and run down the fan-checklist, but he had to endure a jail sentence in-between that supposedly changed the shape of the album in it’s entirety. Yes, the pre-jail Dreams Worth More Than Money is not the one we got, which might leave some to anticipate and entertain what could be more music to come, but it might also leave you to disregard what could have been and instead stare at a simpler truth: the Dreams Worth More Than Money we got is pretty damn good.

DWMTM is only a couple minutes shorter than Meek’s last studio album and holds the same amount of tracks, but the glaring difference here is the content featured on these tracks. We don’t get a lot of the epic yet sometimes drawn-out storytelling on this record—instead, every chance Meek gets at a home run, he’s swinging. Generally speaking, Meek chases the catchier hooks and the more club-friendly sounds on this album, not being afraid to lean on his features for the betterment of the track. ‘R.I.C.O.’ is practically a Drake leftover from his forthcoming release with a Meek verse glued on the end, but it’s still a slapper regardless of who shines more. ‘Jump Out the Face’ rides the Future train fresh off of 56 Nights but bangs regardless with a stellar performance from Meek, and even The Weeknd’s addition, ‘Pullin’ Up’ is an unexpected win for Meek even if the Weeknd stimulus is glaring.

Meek’s friends aren’t necessarily helping him all the time though— ‘All Eyes On You’ sounds like a bonus cut off new-boo Nick Minaj’s last album with the traditional, almost mundane Chris Brown hook and a lay-up verse from Nicki, and the other Nicki track ‘Bad For You’ sounds forced and fails to impress as much as their collaborations on The Pinkprint. Still though, Meek is able to stand on his own two and work in unison with collaborators for an upbeat listen, and even if he’s leaning on hooks and guests, he still has room for bars. The Swizz Beatz assisted ‘Classic’ sees Meek rhyming on a major mafioso beat courtesy of Bangladesh with plenty of quotables like “Make a movie on your bitch, tell her friend to get a role/ You thought she was innocent, we laughing like she been a hoe!”. Classic indeed.

‘Ambitionz’ flips Tupac’s aged classic to prove that Meek can fit storytelling amongst the club smashes, lamenting and reflecting about his crime infested past. Boi-1da shines with a glowing sample of Pac’s magnum opus while adding a modern flavour to it, and ultimately permitting Meek to find a sick pocket in every verse to be cunning and chilling at the same time. It’s here where the hope for Meek is restored and the wait for this album is justified for many, as Meek might be able to step outside of the box and make up for lost hits, but he’s also able to return to his roots and deliver what Meek fans listened to him in the first place for. Intro ‘Lord Knows’ sees a similarly stunning performance from Meek with an orchestral beat backing him, as he lyrically holds no punches and grants Canadian juggernaut Tory Lanez permission to absolutely slay the hook. In his own verses, Meek tears apart song structure and ditches the 16’s to find fulfilment in spitting countless bars and letting the beat loop itself as long as necessary.

Meek might not have delivered a classic moment as stellar as his last album’s intro, but he was able to deliver a more memorable and momentous project by cutting the fat with his own verses and having most of his guests kill it, too. There’s not a lot you wouldn’t expect here, it’s Meek using his yelling-inflection to spout raps of grind, crime and bitches all while adding in more topical bits like his new relationship, recent jail time, and new money. When all is said and done, though, Dreams Worth More Than Money might have trouble clawing for a top spot among the year’s elite, but it definitely will not go by the wayside, and will have fans’ collective thirst effectively quenched.