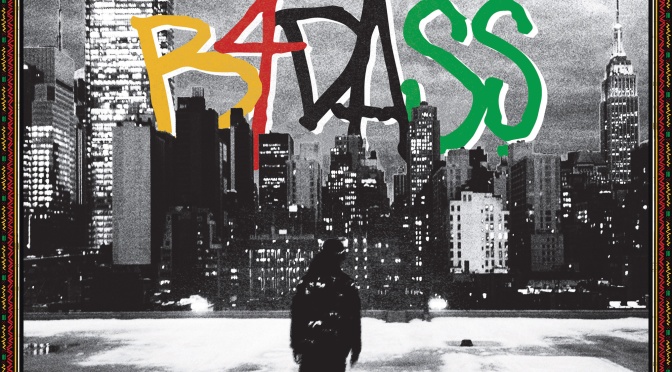 This year has begun with a bang and a handful of artists are prepping their album releases in these next few months. The “reigning rap supreme” Joey Bada$$ is looking to make an early mark on the year with his highly anticipated debut studio album, B4.DA.$$. Joey was one of the most influential figures in the Beast Coast NY movement that includes Flatbush Zombies and The Underachievers, his mixtape 1999 was a critical success, but his follow up Summer Knights was met with lukewarm reception as his smooth flow changed to a much rougher and stagnant style. B4.DA.$$ is the debut album that Joey fans were hoping for, it blends classic boom-bap style of New York with the upper echelon lyrical skill that Joey has become known for. It is a smooth listen from to back, and it contains some of Joey’s best songs yet.

The album opens up with the Statik Selektah produced track ‘Save the Children’. The beat is classic boom-bap with smooth bass, but its real highlight is the hazy trumpets that lace the entire instrumental. Joey unleashes some of his best wordplay to date over the Statik beat. The opening bars “It’s all a hidden history, and mysteries. I see vividly, hysteria, cause misery on the interior, sh*t gets more scarier. I’m never in fear, just a little inferior in some areas” is the type of lyrical prowess one hopes for when listening to Joey. It is difficult to fully take in the meaning of Joey’s lyrics in one sitting, as a few bars he can talk about the lack of media awareness in the ghettos of New York and then switch gears and discuss his own lack of skill in some areas. Though Joey is willing to admit his shortcomings, he is just as quick to declare that nobody is beating him. “They ain’t tryna’ see me in the battle, the lines is too narrow, they couldn’t even outshine my shadow.” It is lines like these that often have fans looking perplexed, thinking “daaaaamn”.

After the brief interlude ‘Greenbax’ where a young Joey is talking about making money, comes the song ‘Paper Trail$’. The beat was produced by DJ Premier and actually samples their previous collaboration, ‘Unorthodox’. The singing in the background with the descending bass and piano keys make it an album highlight. Joey’s flow on this track is absolutely impeccable and his lyrics are up to the challenge as well. The song is aptly titled ‘Paper Trail$’ as Joey discusses coming up without much money and also the effects of money. The song is also notable for one of the cleverest Dragonball Z lines in recent memory with Joey spitting “Listen into the chamber, get hyperbolic, they raisin’ max, I raise stakes to keep the brolic.”

Who f*cking with the rap supreme?”

The overwhelming theme of B4.DA.$$ is in the above lines, the album deals with money problems and also asserts Joey as the lyrical new rap supreme. The next four tracks are all solid tracks that continue the lyrical onslaught brought on by the introduction track, but it is the 8th track, ‘Belly of the Beast’ that takes the cake as the best song on the album and one of Joey’s best songs period. The beat starts out as a horror movie intro that leads into an almost heartbeat like bass that thumps throughout the track. The bassline has help from tambourines and maracas that blend in nicely with some rising background vocals that haunt this track.  The beat takes on a grimy mood once Joey enters in with bars, “I swear all my life,  I been around crips and bloods, crips and slugs.”This song is a vivid picture of New York street life with Joey rhyming in one of the best flows he’s ever used that also pays homage to his Jamaican background. The guest feature from Jamaican reggae artist Chronixx delivers a haunting and somewhat monotone chorus that works quite beautifully into the dreary song. His gritty verse adds to the moodiness of the song and really elevates it to a completely different level, above any other track on the album.

It is hard to dislike the other tracks on the album and it is harder to find many faults with the remaining tracks. Some tracks are not as good as others, however it does have faults. The most notable slip is the track ‘Escape 120’, where the track itself is quite enjoyable with a catchy hook and great beat, but the Raury feature is clunky. Rather than stick with the tempo of the song, Raury comes in with an extremely uptempo and forced flow and then proceeds to moan in the background. This track started as an album highlight but was unfortunately brought down by the feature.

Overall this album is a superb old school influenced New York album. Joey does not falter with his lyrics, he delivers bars that have people scratching their heads trying to decipher, his flow is extraordinarily improved from Summer Knights and his beat selection is on point. Many people have been wondering if he could make something on par with 1999, the answer this album provides is a resounding no, as he gave us something better. Aside from a few slips in a few beat choices and a guest feature that doesn’t live up to the rest of the album, B4.DA.$$ is a future classic in hip-hop.