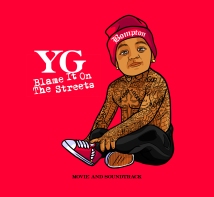 It is no secret that 2014 has been a tough year for music. Aside from Taylor Swift’s record breaking album, this year has been hit and miss on sales for the large part. Even with album sales aside, the quality has been lacking across many genres; one of the exceptions has been YG. On March 18th he dropped My Krazy Life which managed to unite critics and fans alike to not only say it was a high spot for 2014, but also an important album for gangster rap.

Looking to follow up on the success of My Krazy Life, YG put together a short film and a soundtrack to go along with it. It is a fairly bold move for any artist, let alone who only 9 months ago dropped his debut album. For the most part it works well and keeps the gangster vibe going. The soundtrack somehow manages to come off as even grittier and more gangster than My Krazy Life. When played in unison with the movie it begins to come together well. YG already gave the media what they (and his fans) wanted, this is strictly for the streets.

The soundtrack opens up with a live performance of ‘BPT’ preceded by a hyped up introduction for YG. This live rendition of ‘BPT’ is in-front of a energetic crowd and has YG rapping with fervor over the banger beat. The song was great in My Krazy Life and is great live. The next track, ‘Bicken Back Being Bool’ remix features all blood rappers and is undeniably banging. Though YG does not add in a new verse, all three rappers absolutely KILL IT. In Mack 10’s verse the beat gets a nice touch up with some deep pianos that add some serious flavor to the already superb gangster anthem. Possibly the greatest part about this track are the “suwoop” ad-libs in the background of the track that just reaffirm this is a YG album, not your average rapper.  Following the blood remix YG gives us the first new song, ‘Blame It On The Streets’. Jay 305 gives us the hook and and leads off with a solid first verse, but YG steals the show with his surprisingly strong flow.  The beat puts off a grimy vibe like this is the type of song you can picture listening to when you’re up late about to do something illegal.

From here YG gives us two remixes of songs already heard before, RJ’s ‘Ride With Me’ and The Neighbourhood’s ‘Me & My Bitch’ remix. Both songs are fine enough, but I can’t help wonder why YG put such a soft melodic song on the soundtrack for a movie that has very little to do with heartbreak and women. The rest of the soundtrack contains all new material and continues the strong gangster vibe. At first, the song ‘If I Ever’ had me shaking my head thinking YG was about to give us a love anthem. After about 20 seconds what sounded like Slim 400 yelled “SIKE” and the track cut the BS completely, becoming an anti-thot anthem with a beat that sounds just like something off an old Snoop album. All three rappers put in a solid set of verses that really capture why you don’t love these hoes.  ‘G$FB’, or ‘Get Money F*ck Bitches’ is another track without YG. The beat is slightly bland but leaves it up for the emcees to carry the song, which for the most part they do.  Slim 400 comes in with a solid verse and RJ follows with another, it’s really only D lo that slacks a bit.

The final two songs are possibly the highlights of the soundtrack. RJ who had a strong outing on 10 summers has been all over Pushaz Ink releases this year and the large majority of his verses have been show stealing. The ‘O.M.M.I.O’ freestyle is just that, it’s a hard hitting acapella with RJ absolutely going in.

“Everybody got opinions mines do shit, I couldnt buy a piece of mine with your 2 cents, so if you aint condusive you a nuisance, pushaz ink.”

RJ has taken full advantage of all that YG, DJ Mustard and the rest of the Pushaz ink crew have given him. The last song ‘2015 Flow’ was released after the Grammy‘s were announced and YG was snubbed. It’s no surprise that the Bompton native was frustrated that his critical success was completely overlooked. Whether he wrote this in response to the Grammy’s or not, this song goes off. The very RZA-like beat is typically not the type of instrumental you expect to hear YG flow over, but he does the beat justice. He’s audibly frustrated and quick to remind listeners that in his opinion, he has album of the year regardless of awards.

“F*ck these n*ggas, they ain’t livin’ what they talkin’ ’bout
Even with a million dollars I’ll still spark it out.”

Those lines essentially define YG. While the current crop of hip-hop artists are making comfortable music for the masses, YG is still in the streets and he hasn’t changed for anything. The movie “Blame It On The Streets” is the closest glimpse we will get at YG in his natural habitat: he’s brass, he’s crafted from the streets and he’s unphased by the Hollywood elites and music industry heads.

Though the soundtrack contains less YG and features more guests, it is still a solid listen front to back. It is important to remember that in unison with this is a short film made by YG, starring YG and was even written by YG. In all, the soundtrack really brings the gangster vibe that the movie created extremely well. 2014 has been a great year for YG and gangster rap as a whole, but with 2015 Flow there is no telling what YG has in store for us next year.