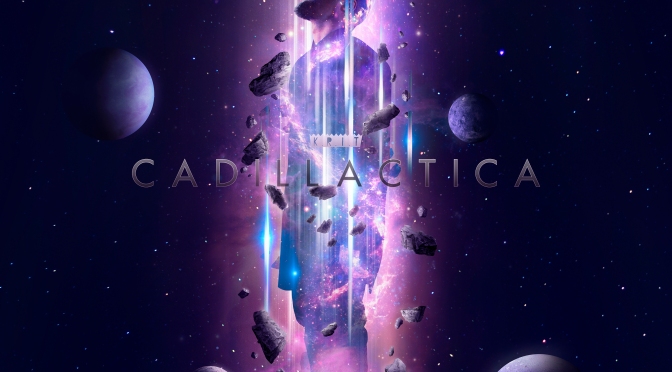 When it comes to traditional, organic Southern hip-hop, Big K.R.I.T. is definitely the best representative of that sound in this new, internet-generation of rappers. With his latest release, Cadillactica, K.R.I.T. literally creates a polished, wholesome world of his own where he flexes his experimental muscles as much as possible without stepping away from his hearty, Southern roots.

In 2012, K.R.I.T. found himself to be yet another victim of a fairly new dilemma plaguing artists that built a career on giving away free, album-quality music. As soon as these said artists sign a major deal and release a studio album, many factors including label pressure, lack of creative control, single-chasing, and ultimately exerting focus on mainstream appeal allow for a lacking, deteriorated, diluted product. K.R.I.T.’s debut, Live From the Underground, received notable amounts of critical acclaim, but seemed to suffer a similar fate. Although it was far from horrible as a standalone project, it seemed flat compared to K.R.I.T.’s near-perfect discography. Live found Big K.R.I.T. seemingly plucking the thematic highlights and messages of his mixtape and making it repetitive in an effort to be catchy, while beefing every track with scattered, radio-ready production that ended up not striking the hearts of his fans the same way his free projects did. K.R.I.T. himself expressed his own retrospective discontent with Live in regards to the lack of creative-control and production issues. Shoutout to sample clearances.

Cadillactica, however, proves that K.R.I.T. learned how to swing from his misses. It is a project that has the R&B hooks, the big named features, the grandiose production, the melody and all, but is  made worthwhile with the lyrical depth and cohesive sound. It is wholesome, experimental, and abstract, all while being unmistakably Southern. Thematically, the poetic intro “Kreation” hangs by a string linking the ideas of creating a child while creating a planet, one that embodies the ideals, vices, and philosophies Krizzle embodies and flaunts. This concept is strengthened as the album progresses, as the album in general is one that picks up momentum as it proceeds. “My Sub Pt. 3 (Big Bang)” is an early favourite, a track that is the third instalment of a series throughout K.R.I.T.’s projects. It’s got the 808s and sub-breaking sound that K.R.I.T. fans have come to love, while lyrically punching the minimalistic beat. This, in essence, embodies what I love about this record so much—the ability K.R.I.T. has developed to deliver hard southern records over original, risk-taking production all while staying creative, record after record. Take “Soul Food”, for instance. With a little help from the legendary Raphael Saadiq, K.R.I.T. presents a groovy-bass line with a slapping, dense drum beat and lyrical finesse—on a slow jam. And it works. Beautifully.

This record promises to never get too slow, though. Tracks like “Cadillactica” and “King of the South” are fast-paced, aggressive glimpses into the real mind of K.R.I.T., as he paints his version of the Dirty Dirty to be a place fluttered with strip clubs, Cadillacs, weaponry and soul—a place where he reigns supreme. The latter is another favorite, as you can’t consider yourself King of something by being passive, and K.R.I.T. fully understands this as he channels his vicious, “Mt. Olympus” inspired self to crown himself and swing subliminal jabs at your favourite rapper. But in the world of Cadillactica, I found that the most quality was found in his introspective, candid moments. “Saturdays = Celebration” weighs the balance of sin and morality over the fluttering piano-based production and the deep bellowing of guest Jamie N Commons. On the last track, “Lost Generation”, K.R.I.T. plays the conscious, positive rapper while Lupe Fiasco stand opposite embodying what could be perceived as evil, but in reality what is the mentality of most rappers of our era. In a very real, reflective battle of positivity vs materialism, Lupe and K.R.I.T. trade verses on what could be the best album closer 2014 has seen. Krizzle questions “What good is flashin’ or livin’ the fastest if you in a casket?” while Lupe worships the ideas to “Take the murder rate even higher and take a nigga bitch in the process”.

Cadillactica is not only a great, cohesive, polished rap album, it is K.R.I.T.’s crowning accomplishment, through and through. It is an album that thrusts him into the spotlight while demonstrating major progress and evolution. Where he once sounded as if he was trying to prove himself or conform to industry standards on his debut, his second album shatters the “sophomore slump” myth by having K.R.I.T. sound as comfortable and confident as ever on his most risky, experimental production to date. KRIT did not just deliver the biggest project of his career, he also delivered one of the greatest rap projects of 2014.